We have previously written about ways to delete individual text messages from a conversation on your iPhone, which is ideally used when you wish to keep the conversation around, but need to eliminate a single message. This can be a good idea if you have a text message that contains personal or sensitive information that you do not want to be seen by someone with access to your device.

But occasionally an entire conversation may no longer be needed or wanted, either because of the content in that conversation, or because it contains a lot of pictures or videos that are taking up valuable storage space on the device. Fortunately iOS 8 offers a simple and convenient way for you to quickly delete any unwanted text message conversations.

These steps were performed on an iPhone 6 Plus, in iOS 8.3. However, these same steps will work for other iPhone models running the same version of iOS, as well as most other versions of iOS.

Note that these steps will delete the entire conversation, including any picture messages that were a part of that conversation. If you would like to save a picture from a text message conversation before you delete it, then you can follow the steps in this guide.

Step 2: Tap the Edit button at the top-left corner of the screen. 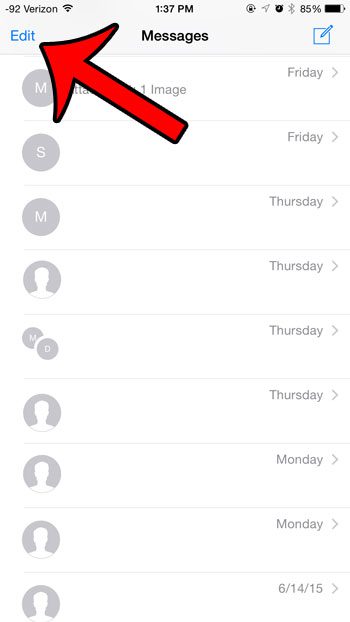