As an iPad owner and user, you are probably aware of many of the capabilities of the device. Aside from having a rear and front-facing camera for still images, it can also record video. But there is no dedicated video camera app on the iPad, which can be a little confusing as you try to record video images. So continue reading below to learn about recording iPad video.

Record Video With an iPad

It’s important to note that recording video on the iPad 2 is going to take up much more space than taking still photographs. The specific size of the video will vary but, for example, a 33-second sample video that I recorded is approximately 46 MB in size. With that in mind, it can save you a lot of space to limit the number of videos you record, or to be sure and offload them from your iPad whenever possible. You can check out this link to learn about syncing your iPad with iTunes.

Step 2: Move the slider at the bottom-right corner of the screen to the Video Camera option, as shown in the image below. 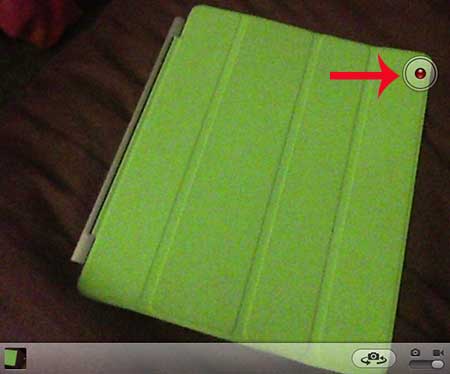 Click here to learn how to record a video on your iPhone 5.