Freeing up space on your iPhone 5 is something that we have discussed here a lot. It is a big problem after you have started installing a lot of apps and downloaded movies, TV shows and music, so it’s good to know some easy places to look when your iPhone starts running out of available storage space. One way to clear up some space is to delete text messages, particularly those that contain a lot of large images. But individually deleting a lot of text messages can be a hassle, so Apple offers an option to delete an entire text message conversation on the iPhone 5.

Delete All Text Messages with One Person on the iPhone 5

I don’t do a lot of video or picture messaging, so freeing up space isn’t a primary concern of mine when I’m deleting text messages. But I do get a lot of group text messages, and I have mistakenly texted a group of people many times when I thought I was texting an individual person. This is the main reason that I frequently delete text message conversations.

Step 2: Scroll to the name of the person that is associated with the conversation you want to delete. 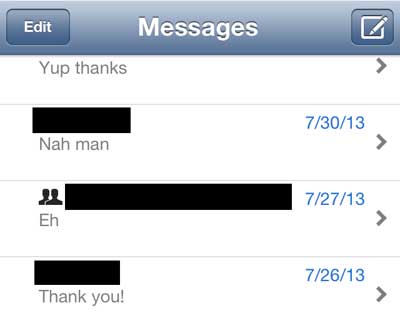 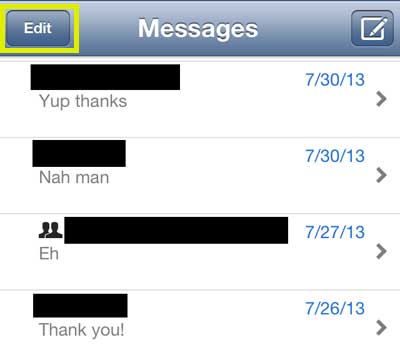 Step 4: Tap the red circle to the left of the conversation that you want to delete.

Step 6: Tap the Done button at the top-left corner of the screen to exit the Edit screen.

Do you want an easy way to watch Netflix, Amazon and Hulu on your TV, or do you need to buy a present for someone that does? The Roku LT is an awesome, affordable device that is useful to a lot of people. Click here to check it out.

You can also learn how to delete an individual text message if you don’t want to get rid of an entire conversation.