If you are on  this page on February 16, 2017, or possibly in the days following, the loading issue that you are experiencing is fairly widespread. Many people are having difficulty signing into the app due to an increased demand on the servers. The Generation 2 Pokemon release is quote popular, so there are many more people playing than normal. Niantic will resolve this issue eventually, but the game may be unresponsive occasionally in the meantime. You can, however, attempt the methods below to try and restart or reload the game if you are having issues.

Pokemon Go is an immensely popular mobile game for the iPhone and Android operating systems. The app uses GPS tracking and cellular data to help you find and catch Pokemon in the real world. At the time of this article the app is still very new, and some users are reporting an issue where they are stuck on the loading screen, and are unable to progress into the app.

One way that you can resolve this is to take advantage of a trick that involves the Airplane Mode setting on your iPhone. Our guide below will show you how to close the app from the App Switcher, enable Airplane Mode, launch Pokemon Go, then turn off Airplane Mode from within the app. This often allows the app to advance pass the point where it gets hung up on the loading screen, which will allow you to play the game.

The steps in this article were performed on an iPhone 5, in iOS 9.3. The version of Pokemon Go being used is the most current one available on July 19, 2016 (version 0.29.2). This issue may be fixed in future updated versions of the app, but the steps below seem to be effective in actually opening the app if it is stuck on the loading screen. If you follow the steps below and this does not work, then there might be an issue with the Pokemon Go servers (This can’t be stressed enough. The Pokemon Go servers go down. A lot. Especially around 5 PM EST.), or you may not have a good enough cellular signal to transmit all of the data that the app uses.

Step 1: Double-tap the Home button under your screen to open the App Switcher, then swipe the Pokemon Go app towards the top of the screen to close it. You can then press the Home button again to exit this view. 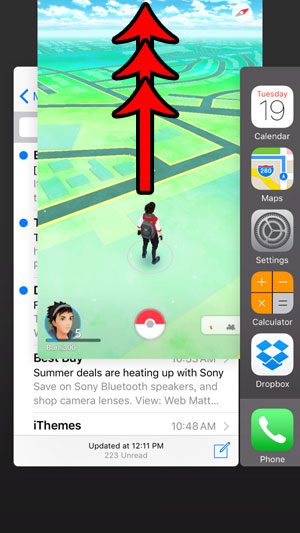 Step 3: Swipe up from the bottom of your screen to open the Control Center, then tap the airplane icon to enable Airplane Mode. 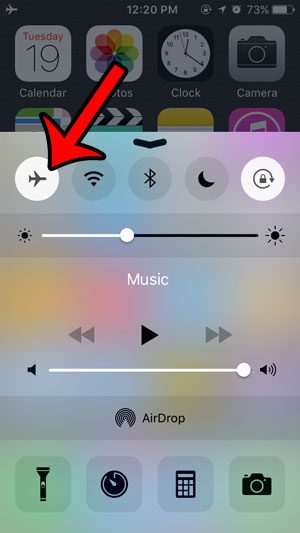 Step 5: Wait for the Pokemon Go app to return to the loading screen, at which point there should be a drop-down banner that says No Internet Connectivity. Swipe up from the bottom of the screen to open the Control Center, then tap on the Airplane Mode icon again to turn off Airplane Mode. 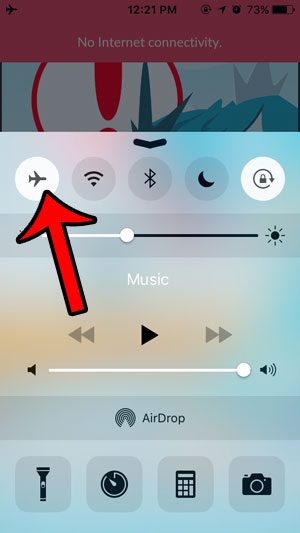 Hopefully the app should now be able to proceed through the loading process and launch the game. As mentioned earlier, you might not be able to use the app if there is an issue with the gamer servers, or you have a poor cellular connection.

Are you having problems with the Pokemon Go app using all of your battery life? This article – https://www.solveyourtech.com/battery-save-setting-iphone-pokemon-go-app/ – will show you how to find the Battery Saver setting and explain what it does.