Pokemon Go has continued to add different game types to the app, to the point where many of the game’s users are still engaged even though the game has been out for several years.

One feature of the game involves “battling” where the Pokemon that you have caught can do battle with other Pokemon.

One place where this can occur is a gym. This is a point of interest in the game where you can acquire supplies, earn coins, and even participate in raids.

Players can also place their Pokemon in the gym to defend it, and players on other teams can attack those Pokemon.

if you win one of these battles, it increases the number of battles that you have won, which is tallied on the “Battle Girl” menu and is visible to your friends in the game.

Our guide below will show you where to find this information so you can check how many battles you have currently won in Pokemon Go.

How to See How Many Battles Won in Pokemon Go

Our guide continues below with additional information on checking the number of battles won in Pokemon Go, including pictures of these steps.

The new friend mechanic in Pokemon Go lets other people that you’ve befriended in the game see some stats about your play history. One of the pieces of information that is visible to your friends is the number of gym battles that you’ve won.

While it’s easy to see this information for your friends, you may be curious about what they are seeing about you. Fortunately, the stats that are displayed to your friends can be found in the game. Our tutorial below will show you where to find the number of battles that you’ve won in Pokemon Go so you can see how you stack up against your friends.

If you have an Apple Watch that isn’t lighting up or making any sounds, then read our how do I turn off theater mode on my Apple Watch article to find out more.

The steps in this article were performed on an iPhone 7 Plus in iOS 11.3.2. The Pokemon Go version being used is the most current version available when this article was written.

These steps will show you how to view the number of battles that you have won in Pokemon Go. If you don’t see the app icon on your Home screen you can swipe down on the Home screen and type “pokemon go” into the search field.

Step 2: Touch your trainer icon at the bottom-left corner of the screen.

Tap the picture of your character.

It is next to your current level and the picture of your buddy.

Step 3: Scroll down and select the Battles icon, which is the one with two pokeballs on it. Select the medal with two Pokeballs inside of a starburst.

The different colored circles around the medals indicate their current level. Currently, your medal levels can be bronze, silver, gold, or platinum.

Step 4: The number of battles that you’ve won is shown at the center of the screen. 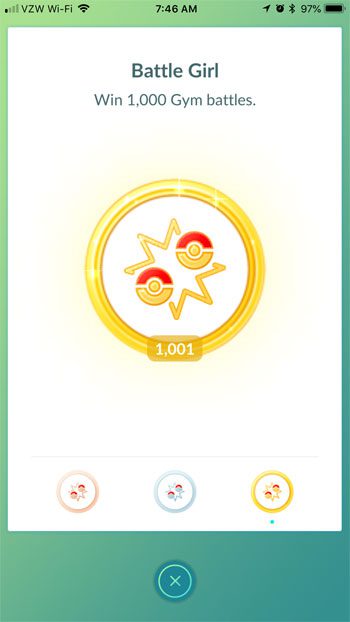 Find the number at the bottom of the medal image.

That number of gym battles won is what your friends can see when they select your trainer name in their friends list.

Now that you know how ot see how many battles you have won in Pokemon Go, you will be able to see how well your stats are doing in comparison to the friends that you have in the game.

You can use a similar method to see how many Pokemon you’ve caught. These are two of the pieces of information that are shown to friends, along with the amount of distance that you’ve covered, which is displayed on the medal with the running shoe.

How do I check the number of battles won in Go Battle League?

there is a medal on your trainer profile that lets you know how many battles you have won in the Great League, Ultra League, or the Master League.

Each of these medals looks like an upside-down triangle. If you tap on the medal for each league it will indicate the number of battles that you have won for that particular league.

Where can I see the number of battles that a friend has won in Pokemon Go?

If you open Pokemon Go and touch your trainer icon at the bottom-left corner of the screen it will open up a new menu.

At the top of that screen is a “Friends” tab that you can select to view your friend list.

When you select a friend there is a “Total Activity” section on their friend card that displays information for:

How many battles do I need to win for the “Battle Girl” medals in Pokemon Go?

There are (currently) 4 different medal levels for the Battle Girl menu. These levels are: