Much like your iPhone, there is potentially sensitive information that can appear or be accessed from your Apple Watch. But if you have a passcode that you no longer wish to use, then follow these steps for how to turn off the passcode on an Apple Watch.

How to Get Rid of the Apple Watch Passcode

Our article continues below with additional information on how to turn off the passcode on the Apple Watch, including pictures of these steps. We also provide steps for turning off the passcode directly from the watch.

Your Apple Watch can contain some fairly sensitive information, so one of the initial steps when you first set it up involved creating a passcode. This passcode needs to be entered each time you put the watch on your wrist, which is a helpful security measure in the event that your watch is ever stolen.

But you may find that you don’t like having a passcode on the Apple Watch and that you want to remove it. Fortunately, you can do this in two separate ways; either directly from the Apple Watch itself, or through the Watch app on your iPhone.

Is your watch face zoomed in and you can’t fix it? Read our tutorial on how to turn off zoom on Apple Watch to get your watch back to its original display zoom.

The steps below were performed with an iPhone 7 running iOS 10 and an Apple Watch running Watch OS 3.0. Once you complete these steps, you will remove your cards used with Apple Pay from the Watch.

This method will require you to use the Watch app on the iPhone.

Step 3: Scroll down and select the Passcode option.

Step 4: Tap the Turn Passcode Off button at the top of the screen.

Step 5: Tap the Turn Off Passcode Lock button at the bottom of the screen.

Step 6: Enter the passcode on the Apple Watch.

As mentioned previously, you can also turn off the passcode directly from the watch, if you would prefer not to use the method through the iPhone’s Watch app.

This method would be preferable for someone that has an Apple watch and no iPhone, or if you like to do Apple Watch tasks on the watch itself instead of on your iPhone.

These steps will show you how to shut off the passcode directly from the Apple Watch.

Step 1: Open the Settings app on the Watch. Press the crown on the side of the watch, then tap the gear icon. Step 3: Tap the Turn Passcode Off button at the top of the screen. 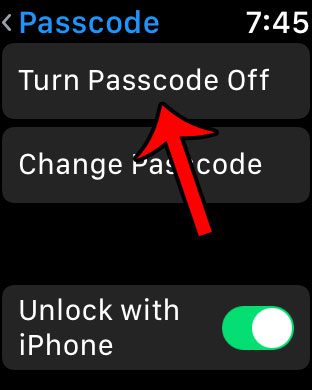 Select the Turn Passcode Off option.

Step 4: Tap the Turn Off button. 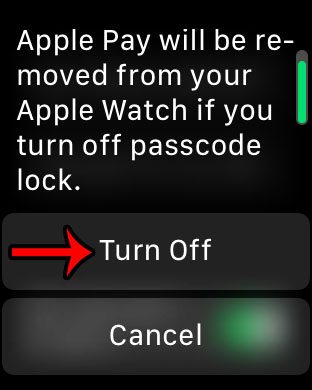 Choose the Turn Off button.

Step 5: Enter the current passcode to complete the process. 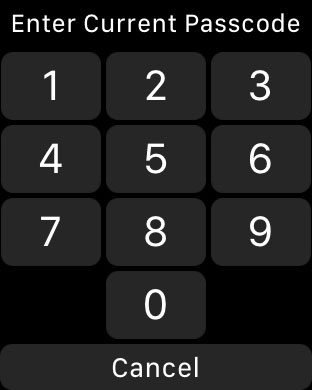 Type your current passcode to confirm.

Now that you know two different methods for how to turn off passcode on Apple Watch you will be able to make this change whenever you need it.

How do I lock or unlock Apple Watch?

If you aren’t able to tap the “Turn Passcode Off” button, then it is likely that there are some restrictions or screen time settings that are enabled on the connected iPhone.

You will need to open that menu on the iPhone and disable whatever restrictions are currently set before you will be able to change or deactivate the passcode on the watch.

Why can’t I turn the passcode off on my Apple Watch?

If you aren’t able to turn off your Apple Watch passcode then there is some kind of device management setting enabled on the paired iPhone.

You will either need to go to Settings > Screen Time and adjust the settings there so that you can turn off the passcode or, if your device is manged by a company or organization, then you will need to contact them to discuss disabling the watch passcode.

Why does my Apple Watch keep requiring a passcode?

If your Apple Watch keeps asking for a passcode then there is something affecting its connection with your skin.

This happens most commonly if the watch is on your wrist very loosely, if there is cloth or something else between the watch and your skin, or if the sensor on the underside of the watch is dirty.

Can I change my passcode in the Apple Watch app?

Yes, if you open the Watch app on your iPhone you can select the My Watch tab at the bottom-left corner of the screen, then scroll down and tap Passcode.

You can then tap Turn Passcode Off to disable it, or you can tap Change Passcode if you want to switch it to something else.

How do I find the Settings app on my Apple Watch?

There are two buttons on the side of your watch. one is a flat button, and the other is a raised dial called the digital crown.

If you press the crown button you will be a bunch of app icons. You need to find the gear shaped app icon and tap it. This is the Settings app for the Apple watch.

How do I change the wrist detection setting on my Apple Watch?

More Information About Changing the Settings for the Apple Watch Passcode

While it can be more convenient to remove the passcode from the Apple Watch, it does remove security that could keep your data safe if the watch is stolen, or if an unwanted person checks it. You can always turn the passcode back on later if you decide you want to use it.

Apple Watch users often decide that they want to change passcode settings when they don’t have a need to manually lock the watch screen. We usually don’t think of the watch as having access to a lot of sensitive information, so electing to disable passcode settings might seem like a good option if you don’t want or need the device to lock automatically.

If you decide later to enable passcode protection again you can always follow these same steps and create a new passcode, or even use the Simple Passcode option and use a four digit passcode instead.

Would you like to stop the reminders on the Apple Watch that come from the Breath app? Turn them off with the steps here and stop receiving the periodic reminders.