The Apple Watch has a bright, crisp screen that can display images and make text easy to read. But if can also play sounds, such as alerts that indicate the arrival or a new text message or a phone call. This is helpful if you rely on those sounds to notify you of certain things, but they can be distracting if you find that the haptic feedback is enough.

Fortunately you can control many of the sounds that come through the Apple Watch, including an option that will put the watch into Silent Mode. If you don’t want to hear any sounds from your Apple Watch, then continue reading below and see how to activate this setting on the device.

How to Activate Silent Mode on an Apple Watch

Step 1: Swipe up from the bottom of the watch face. Step 2: Touch the bell icon to enable Silent Mode on the Apple Watch. Step 1: Press the crown button on the side of the watch to get to the app screen, then touch the gear icon. 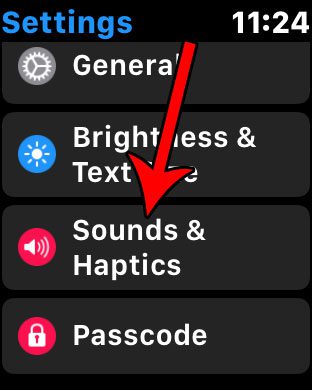 Step 3: Tap the button to the right of Silent Mode to activate it. As mentioned below the Silent Mode switch, this will not silence alarms or timers if the watch is charging.

Would you like to make the watch even less distracting when you are in a quiet or dark environment like a movie theater? Learn how to turn on theater mode on the Apple Watch and silence sounds and stop the screen from lighting up.