Many people that use Norton 360 have not delved into the program to see all of the tools and information that the program has to offer. For instance, we have written previously about how to view the details of your protection status in Norton 360, as well as some other interesting items that are found within the program. But Norton 360 will tell you a lot more than statuses, and it gives you access to a number of tools besides an antivirus program. However, most people will not think about the viruses and threats that were found on the computer once they have been taken care of. Luckily Norton will list these items for you to view in case you ever decide to see what threats have been found on your computer.

Step 1: Double-click the small Norton 360 icon at the bottom-right corner of your screen. If the icon is not visible, you may have to click the upward facing arrow first to display the rest of the items in the system tray. 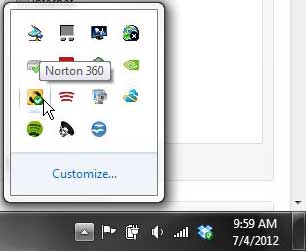 Step 2: Click the white Tasks link at the top of the window. Step 3: Click the Check Security History link under General Tasks at the left side of the window. 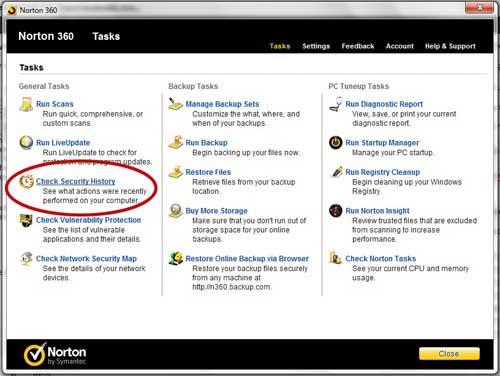 Step 4: Click the drop-down menu to the right of Show at the top of the window, then choose the Quarantine option. The screen will now show all of the items in quarantine by Norton 360 on your computer. Each item has information listed in the Severity, Action, Status, and Date & Time columns that will tell you a little more about the threat.