We have previously written about some of the other functions that Norton 360 includes aside from an antivirus program, such as this article that will show you the status of every currently running Norton 360 utility, but one of the more useful ones is the Norton 360 Startup Manager. This program functions similarly to the Windows utility that you access with the msconfig command, but it provides you with some more detailed information. Once you learn how to use Norton 360 to manage startup programs, you will be able to control which programs start up with your computer and modify them to either decrease the amount of time that it takes for your computer to boot up or increase the number of programs that are ready to go when startup is complete.

Step 1: Double-click the Norton 360 icon in the system tray at the bottom-right corner of your computer screen. Step 2: Hover over the PC Tuneup section at the right side of the window, then click the Run Startup Manager option. Step 3: Scroll through the list of programs in the Startup Manager and check or uncheck the boxes in the On/Off column to include or exclude those programs from startup, respectively. 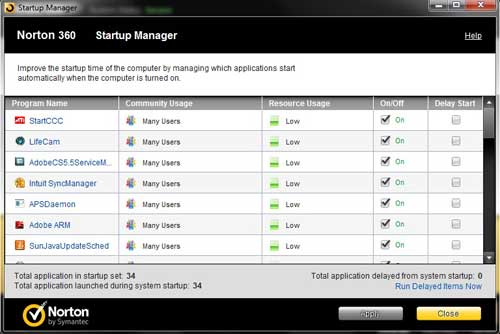 Step 4: Click the Apply button at the bottom of the window to apply your changes. If prompted, restart your computer to apply the changes.

You will note the Resource Usage column, which indicates the usage level that the program requires. If a program has a medium or high usage level, you should consider removing it from startup, as it may be significantly increasing your startup time. You can also check the box in the Delay Start column to have the program automatically start, but shortly after the initial batch of startup programs have launched.