One of the best things about having a functional, full-featured anti-virus programs installed on your computer is the peace of mind that comes with knowing that the program is working to protect you against threats. While some of these threats will be found when you manually run scans on your computer, the majority of them will be found by Norton 360’s active protection and frequent background scans. However, the background scans being run on the computer can take up valuable system resources, and Norton will display a pop-up notification window at the bottom-right corner of the screen when it initiates a background scan or detects a change to your computer. Fortunately you can turn on a Norton 360 feature called Silent Mode that will allow you to temporarily disable the Norton 360 background scan and suppress pop-up windows for a time period that you designate.

How to Turn On Norton 360 Silent Mode

Someone might ask why you would want to turn off background activities and notifications on your computer, as that passive protection is one of the main reasons for having a program like Norton 360 installed on your computer in the first place. Unfortunately, if you are doing something on your computer where you do not want to be disturbed, or where you need almost all of your system resources, then Norton 360’s normal operations could be disruptive. For example, if you are watching a movie or playing a game on your computer, those are graphically intensive applications that require a lot of system resources. Additionally, the immersion in your entertainment can be disturbed if Norton 360 displays a pop-up window letting you know that a scan has started.

The process of enabling and configuring Silent Mode can actually be accomplished without launching the Norton 360 program interface.

To begin, right-click the Norton 360 icon in your system tray at the bottom-right corner of your screen, then click Turn on Silent Mode. 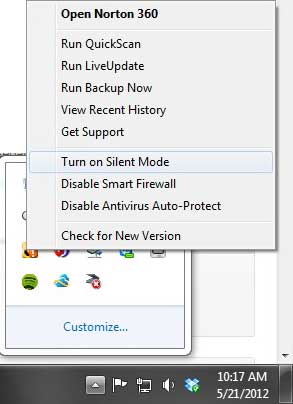 Click the drop-down menu under Select the duration, then click the amount of time for which you would like to temporarily disable your background activities and suppress your pop-up windows. Once you have selected a time, click the OK button. If you decide that you would like to manually re-enable Silent Mode before the time that you designated, you can right-click the Norton 360 icon in the system tray again, then click the Turn off Silent Mode option.