Having an iPad that can connect to cellular networks is great when you are traveling. You can access Internet resources from almost anywhere, ensuring that you are never out of reach. But you can also use features like Netflix, which can make a pretty large dent in your monthly data allotment when it is used on a cellular network. Fortunately it is possible to restrict Netflix so that it can only be used on a Wi-Fi network.

Only Watch Netflix on Your iPad When Connected to WiFi

This is a great way to curb the use the data allotment on your cellular plan, especially if you have a child that likes to watch Netflix on the iPad. It’s simple to setup, and could wind up saving you some money. So continue below to view the steps required to only allow Netflix on Wi-Fi networks.

Step 2: Scroll to the bottom of the column on the left side of the screen, then select the Netflix option. 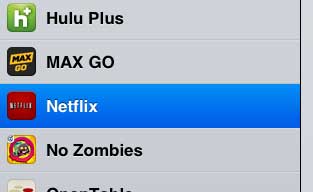 Step 3: Move the slider to the right of Wi-Fi Only to the On position.

There are versions of the iPad that don’t even have a cellular option. Aside from not requiring a monthly payment, then device itself also costs significantly less. You can check out the Wi-Fi only iPad Mini here.

If you can’t seem to turn off the subtitles in Netflix on your iPad, then this article can help.