Your Apple ID makes it very easy for you to sync information and purchased content between multiple devices. The Apple ID is the email address that you used when you initially created an iTunes account or set up your Apple device, and it is what is displayed whenever you need to enter a password to buy a song, app or video. But using the same Apple ID on multiple devices can have the negative effect of showing your text messages on each device.

Turn Off iMessage on the iPad

This is particularly important if you have an iPad, but it is being used by a child, or someone that you don’t want to see your text messages. However, it is also a setting that can easily be turned back on if someone knows where to look. If you are concerned about this, then the best solution is to use a different email address to create a new Apple ID, then set up the iPad with that instead. But if you just want to stop receiving text messages on your iPad, follow the steps below.

Step 2: Select Messages in the column at the left side of the screen. Step 3: Move the slider to the right of iMessage to the Off position.

If you still want to be able to receive messages on your iPad, but only want to receive those that are sent to a specific email address, you can follow the steps below.

Step 2: Select Messages at the left side of the screen. Step 4: Touch the email addresses and phone numbers for which you do not want to receive messages to remove the checkmarks. 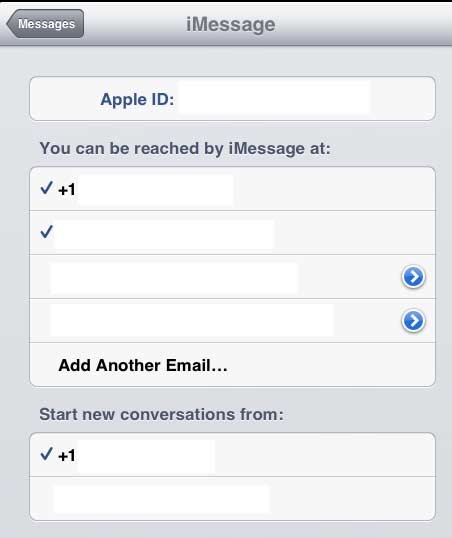 Do you have a backup plan in place in case your computer’s hard drive crashes or it is stolen? Purchasing an external hard drive and storing copies of your files on there is a simple, cost effective way to back up your data. Amazon has some affordable external hard drives that connect via a USB cable.

Do you want to be able to keep people from using your iPad? Try setting an iPad passcode.