The iPhone 5 uses an accelerometer to determine the orientation at which it should display. This is a mechanism inside the phone that determines how it is being held. It can select from either a portrait option, which is the orientation with the smaller keyboard, or a landscape orientation, which has the larger keyboard. This feature works very well, and many people will never have an issue with it.

However, you may decide that it would be to your benefit to enable lock orientation on the iPhone 5. This allows you to lock the orientation of the device so that it is always displaying in the portrait orientation, regardless of how the device is being held.

While the steps below are going to focus on turning on the screen lock orientation, you can also follow these steps if you want to shut off lock orientation on the iPhone 5 as well. The button that you press in the final stage will just change slightly, but it is located in the same spot. 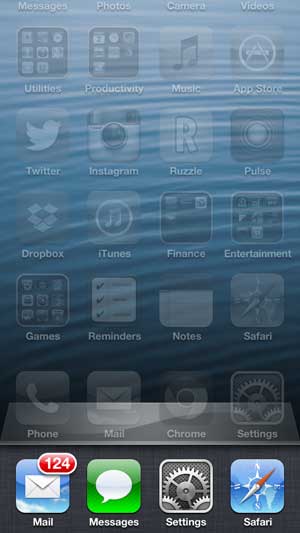 Step 2: Swipe this section to the right so that it changes to the image displayed below.

Step 3: Tap the silver square button with the arrow at the left side of this section so that it changes to the image displayed below.

As mentioned previously, if you want to remove the orientation lock on the iPhone 5, you simply need to return to the screen in Step 3 and tap the icon to remove the lock image.

Do you enjoy using Siri, but you wished she sounded different? Read this article to learn how to change Siri’s voice on the iPhone 5.

If you’re shopping for a gift for a birthday or event, but you’re having trouble finding something good, consider an Amazon gift card. You can personalize them with your own pictures to create a customized card with a personal touch.