Have you purchased a song in iTunes on your computer or iPad, and want to download it to your iPhone? But you have opened the Music app on the device and found that the song is not there? This may be due to a feature that is turned off on your iPhone which would otherwise show all of your cloud music in the Music app.

Whether you previously turned this off because you did not want the free U2 album given to all iTunes accounts, or you were simply tired of always seeing all of your songs, you can change your iPhone’s settings so that all of your purchased iTunes music is displayed in your Music app. This will allow you to quickly search for any song that you own in iTunes and download it to your device.

The steps below were performed on an iPhone 5, in iOS 8.

This tutorial will be showing you how to turn on the Show All Music feature. This adjustment will show all music that has been purchased in iTunes, as well as any music that you have transferred to your iPhone from iTunes on your computer. Songs with a cloud icon next to them are songs that you own in iTunes, but that have not yet been downloaded to your device.

The steps below will assume that the song was purchased with the same iTunes account that is currently set up on your iPhone. 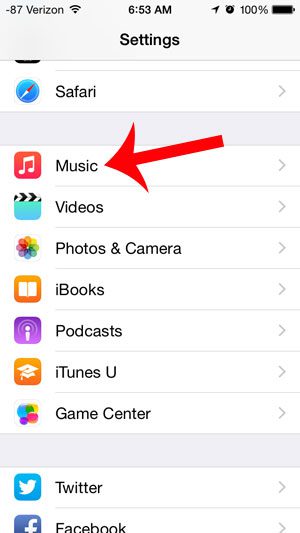 Step 3: Touch the button to the right of Show All Music. You will know that it is turned on when there is green shading around the button. Would you like to download more of your music to your iPhone, but you do not have enough space? Our complete guide to deleting iPhone 5 items will show you how to get rid of some of the apps and files that might be taking up a  lot of that space.