Your iPad 2 makes a lot of sounds. Whether these sounds are meant to alert you that a new message has just been received, or to provide feedback that an action has been performed, many users find them helpful. But there are certain sounds, such as the one that plays anytime that you lock or unlock your iPad, that can become annoying. So continue reading below to learn how to turn off the lock sound on your iPad 2.

There are a number of different sounds that you can configure on your iPad, including the sound that plays as you are typing on the keyboard. You can read here to learn how to disable the iPad keyboard clicks. But continue reading below to learn how to shut off the iPad 2 lock sounds.

Step 2: Select the Sounds option in the column at the left side of the window. 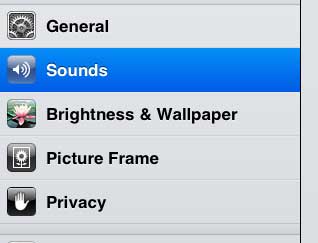 Step 3: Move the slider to the right of Lock Sounds to the Off position.

If you’ve been thinking about upgrading to a newer iPad, there are several options available to you. The iPad Mini provides a great user experience on a smaller screen, while the iPad with Retina Display features one of the highest resolution screen you will find on a tablet.