Did you take a picture with your iPhone that was almost perfect, but there is something you need to remove from the picture? You might have done this with image editing programs like Photoshop in the past, but your iPhone actually has its own built-in editing tool that you can use to crop pictures directly on your iPhone.

Our guide below will show you how to open the iPhone picture editor and crop a picture that you have saved to your Camera Roll. You can even choose to revert to the original image if you find that you don’t like the cropped version as much as what you had originally taken.

How to Crop a Picture on an iPhone 7

The steps in this article were performed on an iPhone 7 Plus, in iOS 10.2. These steps are going to modify your existing camera roll picture by cropping unwanted sections of the picture. 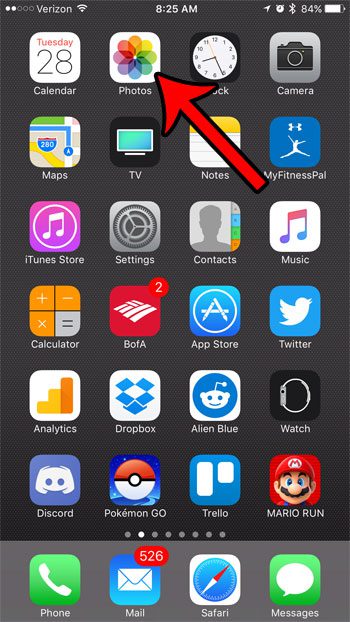 Step 2: Find the picture that you want to crop, then tap the icon at the bottom of the screen with the lines and circles.

Step 3: Tap the Crop icon (to the right of Cancel) at the bottom of the screen.

Step 4: Drag the handles at the corners of the image to the desired crop point on the picture. 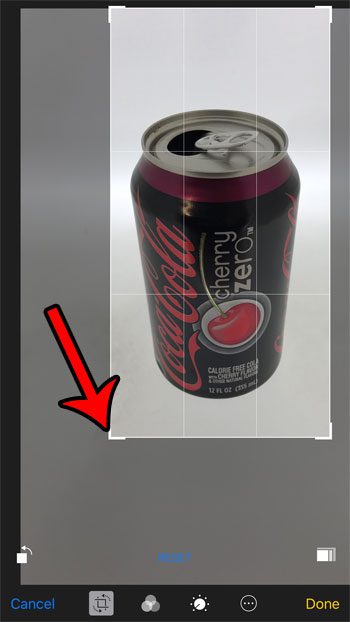 Step 5: Tap the Done button at the bottom-right of the screen when you are finished.

If you don’t like the cropped picture and would prefer the original, simply open the picture in the editing tool again, tap the Revert button at the bottom-right of the screen,

Then select the Revert to Original option.

Are the pictures on your iPhone taking up too much space, but you want to copy them somewhere before you delete them? Learn about uploading pictures from your iPhone to Dropbox for a convenient method that lets you store your pictures in the cloud.