You might discover that you need to know how to restore a deleted picture on your iPhone 7 if you have deleted it by accident, or if you find that you need a picture that you have already removed. The method for deleting a lot of pictures on the iPhone, such as when you need to gain some more storage, lends itself to scenarios where you unwillingly delete pictures that you intended to keep.

Fortunately, on your iPhone 7 running iOS 10, pictures that you delete aren’t actually deleted from the phone unless you also take an additional step. If you have not also emptied the Recently Deleted folder in the Photos app on your device, and it hasn’t been very long since the picture was deleted, then there is still a chance that you can recover the deleted picture.

The steps in this article were performed on an iPhone 7 Plus, in iOS 10.2. Note that this will only work if you have deleted the picture in the last 30 days, and you have not emptied the Recently Deleted folder in the Photos app since then. 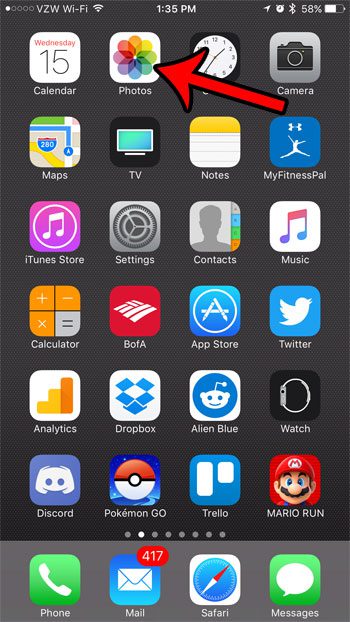 Step 3: Scroll down and select the Recently Deleted album. 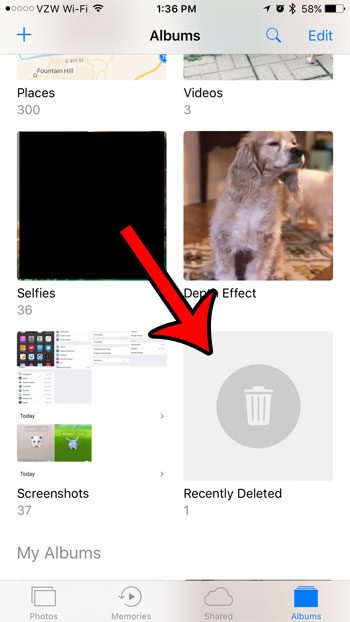 Step 4: Touch the Select button at the top-right of the screen. 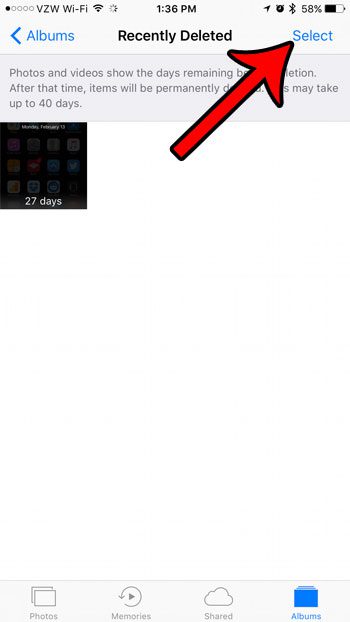 Step 5: Select the picture that you wish to restore, then tap the Recover button at the bottom-right of the screen.

Step 6: Tap the red Recover Photo button to confirm that you wish to restore the picture to the Camera Roll.

You can then return to the Camera Roll folder to find the recovered picture.

Did you know that your iPhone 7 has a camera on the front and the back? Learn how to switch between these two cameras on the iPhone if one option is more convenient for you.