The iPhone 5’s navigation system includes a series of Home screens containing, at most, 20 icons per screen. Whether these icons are for folders containing multiple apps or for individual apps, it’s likely that you will eventually have multiple screens through which you need to navigate. This can make it difficult to locate specific apps that you use a lot. Fortunately there is also a dock that remains stationary at the bottom of the screen which can contain four apps. But if there is an app in that dock that you don’t use a lot, you might want to remove it. You can read our tutorial below to learn how to remove an app from the dock at the bottom of your iPhone screen.

Removing an App from the iPhone Dock

Note that this tutorial focuses specifically on moving an app from the iPhone’s dock. Once an app has been removed, you can elect to drag a different app into the dock to replace it using the same technique outlined below.

Step 1: Unlock your iPhone to display a home screen. Step 2: Touch and hold your finger on one of the app icons at the bottom of the screen until they start to shake and a small x appears at the top-left corner of some of the apps. Step 3: Drag the app icon out of the dock at the bottom of the screen to a spot on the home screen. Step 4: Press the Home button (the physical, rounded square button under your screen) to exit this mode and lock in your new app layout. 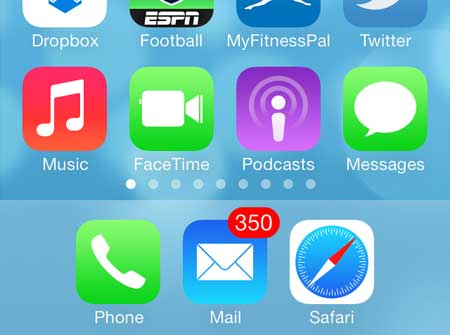 Have you been looking for a cheap iTunes alternative to rent or purchase movies or TV show episodes? Amazon Instant is typically less expensive, plus they are constantly having sales. Additionally, you can use the free Amazon Instant app to view your videos on your iPhone.