Since cameras on phones are becoming better and better, people are starting to use them more often and, in some cases, as their primary camera. One of the best things about using a phone camera is the ease with which you can share any images that you take. The simplest way to do this is by sending the picture to someone through a picture message. But if you receive a picture message on your iPhone 5 and you want to do something with the image, you might have trouble geting the image to your computer or to an image editing app on your phone. One way that you can distribute the picture is by saving it to your Dropbox account.

Save Picture Messages to Dropbox on the iPhone 5

This tutorial is going to assume that you have a Dropbox account (it’s free!) and that you have installed the app on your phone. If not, then head over to www.dropbox.com and sign up for an account. Then you can download the Dropbox app from the App Store on your iPhone 5. To make your new Dropbox account even more useful, you can also download the Dropbox desktop app for either Mac or PC so that anything you sync from your phone will instantly be available on your computer. You can also read this article to learn how to automatically sync any pictures you take with your iPhone or iPad directly to your Dropbox acount. But continue reading below to learn how to save a picture from a text or picture message.

Step 1: Navigate to the picture you want to save, then press the blue arow to the right of the image.

Step 2: Tap the Share button at the top of the screen.

Step 3: Touch the Open in Dropbox icon. You might need to swipe to the second screen of options if you have installed a lot of apps on your phone. 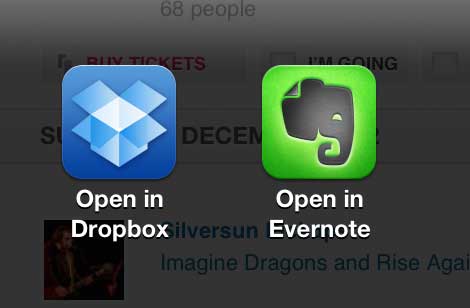 Step 4: Touch the Save button at the top of the screen to save the picture to your Dropbox account. 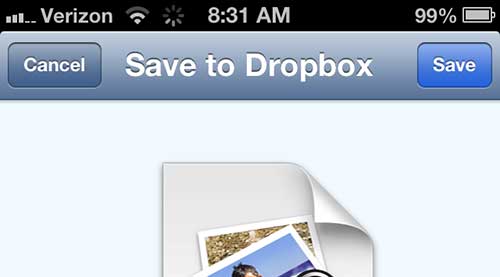 Now the image will be accessible either through the Dropbox app on your phone, or through any other device or computer that you have synced with your Dropbox account.