If you have an iPhone 5 and a Dropbox account, then hopefully you already know about the convenience of automatically uploading pictures from your iPhone to Dropbox. But the Dropbox app and service are much more than a picture uploader; you can also take advantage of the file syncing to download and store files so that you can use them while you are offline. This is very helpful if you have some songs or videos in your Dropbox account that you want to be able to listen to or watch when you are on an airplane, or a location that doesn’t have a good cell or Wi-Fi signal.

Step 2: Select the Files icon at the bottom of the screen.

Step 3: Swipe from left to right on the file you want to save for offline usage to bring up this menu. You can also open the file, and select the star icon at the bottom of the screen instead.

Step 4: Touch the Star icon to save the file for offline use.

Step 5: Touch the star icon at the bottom of the screen to open your list of files that are saved for offline use. Note that files with a green check mark have been downloaded to the device, while in-progress files have a blue “syncing” icon on them. 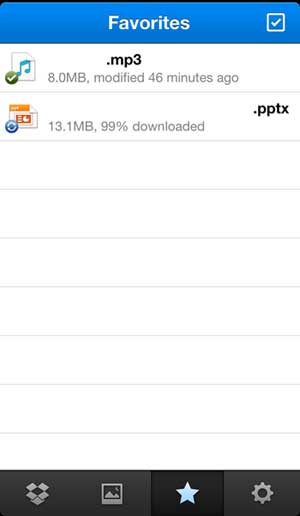 Using Dropbox is a great way to put your files in a location where they are accessible from multiple locations. But if you have important files on your computer that you don’t put into Dropbox, it’s a good idea to have a backup copy of them somewhere. Check out this 1 TB external hard drive from Amazon for an affordable, easy way to store backups of your files.

Click here to learn how to use a free program called CrashPlan to backup your computer easily and automatically.