The best part of using a Dropbox account is the fact that you can access the files in that account from anywhere that has Internet access. You can really take advantage of that fact by immediately uploading files from your computer, phone or tablet to Dropbox so that the file is there if you need to get to it from a different device. But sometimes it can be annoying or difficult to upload a lot of files at once, or you might simply forget to upload some pictures that you thought you had uploaded before. The iPad Dropbox app has a feature that allows you to rectify this problem, however. By turning on the Camera Uploads feature in the app, you can configure the iPad Dropbox app to automatically upload pictures to your Dropbox account so that they will be available for you in the future.

The Camera Upload Setting in the iPad Dropbox App

One additional benefit that you gain from using this feature is that all of the pictures you upload will be saved to the Camera Uploads folder in your Dropbox account. This organization ensures that the images don’t get lost amidst everything else that is in your Dropbox storage. The pictures are labeled with the date and time that you took them, which will give you an easy way to identify the images that you need.

Step 2: Tap the Settings button at the bottom of the screen.

Step 3: Tap the Camera Upload option at the center of the screen. 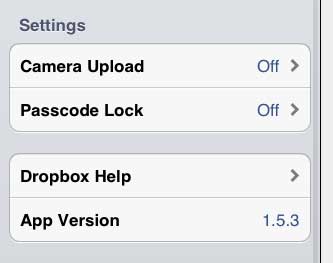 Step 4: Touch the Off button to the right of Camera Upload so that it switches to On. 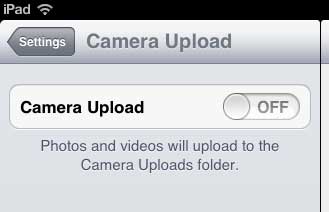 Step 5: Choose the Upload or Don’t Upload option on the pop-up window, depending upon whether you want to upload your existing videos and photos. 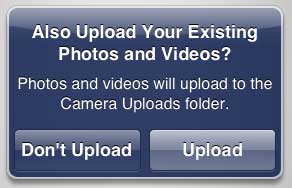 You will note that turning on the Camera Upload option also adds a new Use Cellular Data option on this screen. If you have an iPad that has a cellular data plan, you can turn this option to On if you want to upload pictures to Dropbox when you are using cellular data. If you leave the setting at Off it will only upload pictures when you are connected to a WiFi network.

Now, whenever you launch the Dropbox app from your iPad it will automatically upload the pictures that you have taken since the last time you uploaded your images.