As you’ve been using your iPad 2, you’ve probably downloaded some new apps and learned how to use the ones that came pre-installed on the device. But one app that you might not have had a chance to use yet is the Messages app. This app lets you use the iMessaging feature in iOS that allows you to send text and multimedia messages to other people that have iMessage capabilities on their iPhones, iPads or iPod touches.

Turn on iMessage on the iPad 2

Before you start using iMessage, there are a couple limitations that you need to be aware of. First, as mentioned above, these messages can only be sent to other people that have Apple devices. Second, if you do not have an iPhone, then people will only be able to reach you at the email addresses that you have enabled for iMessaging. This will typically be your Apple ID, although you can add additional email addresses, if you so choose. If you do have an iPhone, then you can elect to use your phone number to send and receive messages from your iPad, provided that the iPad and iPhone share the same Apple ID.

Step 2: Select Messages at the left side of the screen. Step 3: Move the slider to the right of iMessage to the On position. 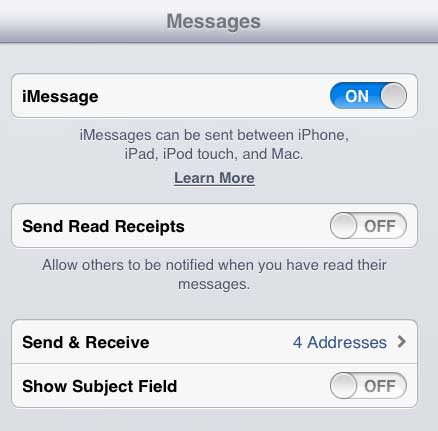 Have you been using iTunes Wi-Fi sync feature for your iPad? If not, read this article to learn how to set it up.