A wireless network is an incredibly useful thing to have in your home or office, as it means that any device with wireless networking capabilities can access the Internet and network resources. 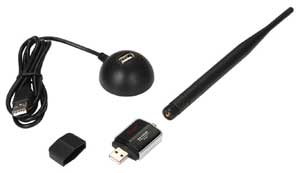 Connect to a Wireless Network with a Wired Computer

The solution to this problem is going to require you to purchase a wireless network adapter, but you can find some good ones for very low prices. Many of them will work simply by plugging them in, while others will require you to install some software to get them up and running. The one that I am using on my Windows 8 desktop computer at home is this Rosewill USB 2.0 external adapter. The installation of this thing couldn’t have been any simpler; I put all of the pieces together and connected it to a USB port on my computer. Windows 8 recognized it without a problem (I didn’t even need to use the installation disc), and I was connected to my wireless network within minutes. It is also compatible with earlier versions of Windows as well.

This MediaLink Wireless N USB adapter is a good choice as well, and costs roughly as much as the Rosewill mentioned above. As with the Rosewill, this device has literally thousands of positive reviews, many of which praise the ease with which it can be installed. For people that are worried about the size of the Rosewill’s antenna, this smaller option from Medialink might be a better choice. The MediaLink can also be installed in Windows 7 without even using the installation CD, which makes the process that much simpler.

Specific instructions for how to connect a non-wireless computer to a wireless network are going to vary based upon the particular brand of wireless USB adapter that you purchase, but will follow these general steps.

Step 3: Insert the installation CD into the disc drive on your computer, then follow the on-screen prompts. Usually you will not be connecting the adapter itself until specifically instructed to do so by the installation wizard.

Step 5: Select your wireless network from the list of networks in range.

Again, these are very generic instructions, as each individual adapter will be slightly different. But for most of the better options out there, the installation will follow this general structure.