The email, entitled “Critical Update from HP,” identifies a potential for a certain type of unauthorized access to specific models of Laserjet printers, and was sent to anyone who had registered an affected device with HP. While this wording might set off alarm bells in your head, the best course of action is to take the steps identified by HP, and update HP Laserjet firmware that could contain the security loophole.

Step 1: Open a Web browser window and go to the HP Support document.

Step 2: Scroll down the page and identify the Laserjet model for which you need to update HP Laserjet firmware.

For example, one of the affected printers that I have is the HP Laserjet P2035. There are two columns with links in the table, but you can click the link in either column to access to file you need to update HP Laserjet firmware.

Step 3: Click your language from the drop-down menu at the center of the screen, then click the operating system of the computer through which you will be installing the firmware. 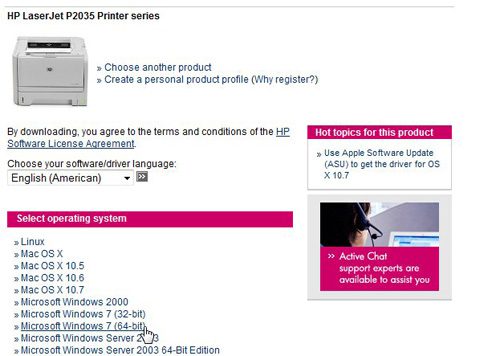 Step 4: Click the “Download” button in the “Firmware” section of the window, then save the file to your computer.

Make sure that the printer is connected to your computer and is turned on before you attempt to update the HP Laserjet firmware. Otherwise you will get a “Printer Not Found” pop-up window.

Additionally, do not disconnect the printer or turn it off before the firmware update has finished. Doing so could cause damage to your Laserjet printer.