Have you ever needed to send a text message to someone at a particular time, but it’s inconvenient for you to do so? Scheduling messages has long been a a useful feature in Outlook, and it’s now something that you can do on your Android smartphone with the Marshmallow operating system.

This method takes place in the default Messages app on the phone, and follows many of the same steps that you would use to send a regular text message. However, you are able to select a separate Schedule message option where you can specify the time and date of the message. Android will then proceed to send the message at the time that you choose.

How to Schedule a Text Message on a Samsung Galaxy On5

The steps in this guide were performed on a Samsung Galaxy On5 using the Android Marshmallow operating system. The result of completing this guide is that you will have created a text message which will be sent at a time you specify.

Step 2: Select the intended recipient, then type the message, but don’t send it yet. Tap the More button at the top-right of the window. 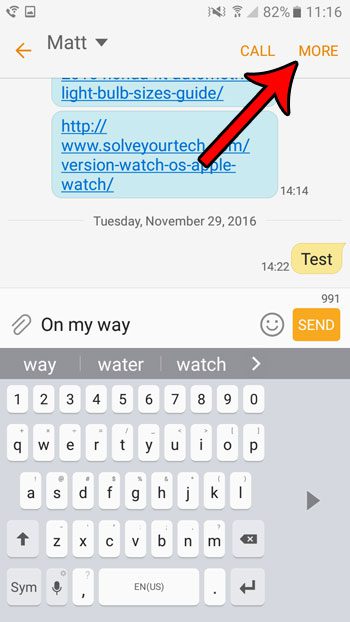 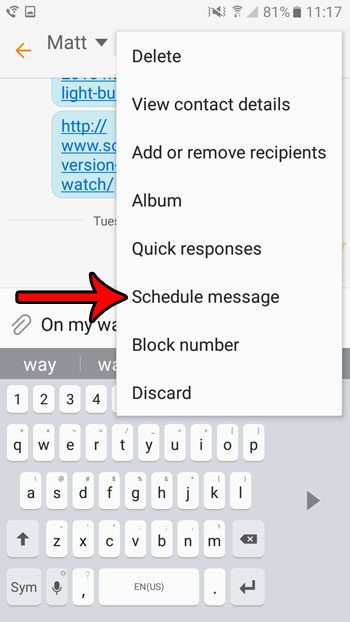 Step 4: Choose the time and date, then tap the Done button at the bottom-right corner of the screen. The scheduled time for the message must be at least 6 minutes in the future.

Step 5: Touch the Send button at the bottom-right corner of the screen. Note that there should be a message about the scheduled time of the message above the message itself.

Would you like to be able to create and share images of your screen like the ones used in this guide? Learn how to take screenshots in Android Marshmallow using a default feature of the device.