The iOS 9 update for your iPhone brought about a lot of interesting new settings and features, such as Wi-Fi Assist and a Low Power mode for your battery. But perhaps the most striking new aspect of iOS 9 is that your iPhone is now using a different default font. The difference between the old font and the new font is relatively subtle, and a lot of people may not even realize that it has occurred. However, it does look different enough that something on your iPhone will probably seem a little off, although you may not be able to identify exactly what is different.

The new font is called San Francisco, and it replaces the previous default font of Helvetica Neue. if you also have an Apple Watch then the font may feel familiar, as it is used on that device as well. You can see a comparison of the two fonts on the Settings screens below.

Unfortunately the font that you use on your iPhone is not something that you can change, so you will be forced to use the San Francisco font once you have updated to iOS 9, and you will be using the Helvetica Neue font for versions of iOS prior to iOS 9.

You can, however, make some minor adjustments to the display of text on your iPhone, such as making the text larger or bold. You can find these options on the Accessibility menu, which is located at Settings > General > Accessibility. 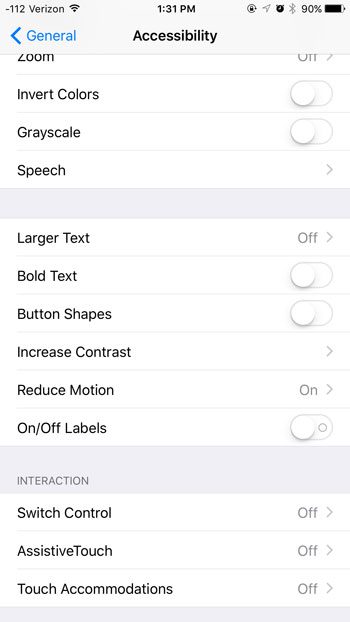 One additional place where the display of the font becomes noticeable is on the keyboard. The iPhone keyboard will now alternate between upper and lower case letters, based on which type of letter you are about to type. That behavior is one that you can stop, and you can learn how by following the steps here.