If you are coming from a computer background that is mostly focused on Windows computers, then you are likely used to being able to customize most of the elements of your screen. The options available on the iPad are not as numerous as they would be on a Windows 7 computer, but you will find that many of the things you want to personalize can be done. One customizable option is the wallpaper, or background, shown behind the app icons. You can choose one of the pictures on you camera roll and set it as your iPad wallpaper using the tutorial below.

How to Set a Picture as Wallpaper on the iPad 2

We have also written about how to change the wallpaper on your iPad 2 using one of the preset options that come on the device. The method described in the article below is slightly different, however, as it allows you to use an image that you either took or created and set it as your background.

Step 2: Select the location of your photo from the choices at the top of the screen.

Step 3: Touch the thumbnail of the picture that you want to set as your wallpaper.

Step 4: Tap the Share icon at the top of the screen.

Step 5: Select the Use as Wallpaper option. 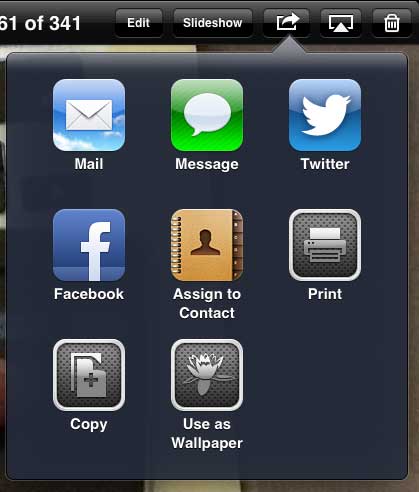 Step 6: Touch the Set Home Screen button at the top of the screen.

If you’ve been looking for a program that allows you to edit and design your own images, check out Adobe Photoshop. You can purchase it as a subscription now, which can make it much more affordable than purchasing the program outright.