There are various elements of the Microsoft Word 2010 program that you might only see intermittently, or which you might only know about from working on a version of the program on a different computer. One such element is the “Navigation” pane that can be shown at the left side of Word 2010’s program window. This pane offers a convenient place to browse through the pages of your document, or to search for text within the document.

The Navigation pane is a feature that can be viewed or hidden by adjusting a setting within the program. This setting will stay applied as Word 2010 is closed and opened so, if you have previously hidden the Navigation pane, or if it was never visible to begin with, then you can follow our guide below to learn how to show the pane and start using it.

Display the Navigation Panel in Word 2010

The steps in this article will show you how to display the Navigation column at the left side of the window in Microsoft Word 2010. This column will remain visible for the entire time that Word 2010 is open. Once you no longer need the Navigation pane, you can close it by unchecking the box that you check in Step 3 below. 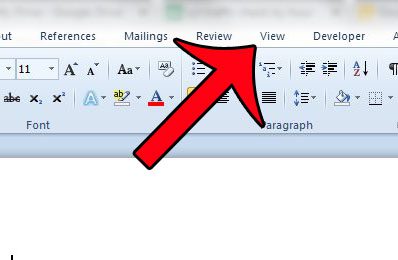 Step 3: Check the box to the left of Navigation Pane. You should now see this pane at the left side of your window. 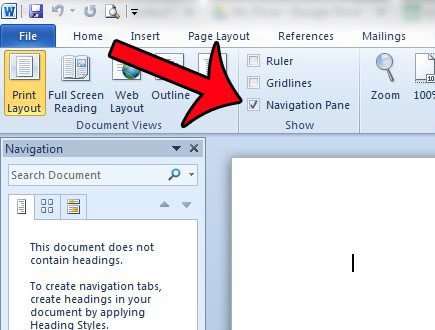 Have you ever worked on a document in Microsoft Word 2010 with a group of people? It can be difficult to see when changes have been made in situations like this, so it can be helpful to use the “track changes” feature in the program. Click here and learn how to turn it on for a document that you are editing in Word 2010.