Some of the apps that you install on your iPhone want access to some of the other features and apps that you have installed on your device. These permissions allow those apps to use these features to provide the full functionality of which the app is capable.

In the case of Pokemon Go, one of the permissions that it wants is for the camera. This permission allows Pokemon Go players to use the game’s AR feature, which will display a Pokemon as though it was physically in front of you. It’s a fun addition to the game, and is even an important component of some of the tasks that you may eventually want to perform while playing. But if you aren’t able to use the AR feature, then it’s possible that you have not allowed camera permissions yet. Our tutorial below will show you where to find this setting so that you can either enable or disable Pokemon Go camera access as you see fit.

How to Change Pokemon Go Camera Permissions on an iPhone 7

The steps in this article were performed on an iPhone 7 Plus in iOS 11.3.2. I am using the most current version of Pokemon Go available when this article was written. Note that disabling camera permissions for Pokemon Go will prevent you from being able to use the AR feature of the game. 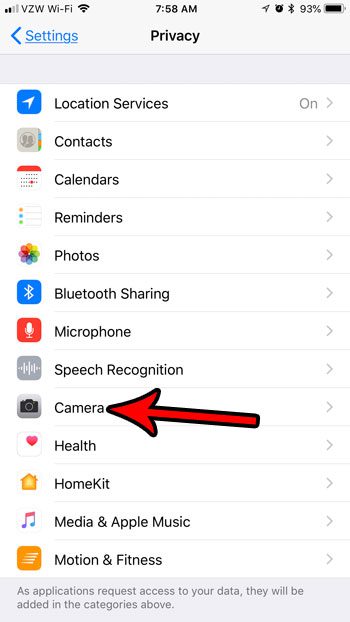 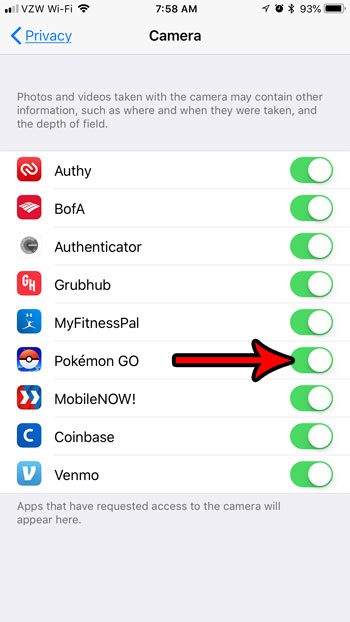 Have you been using the friends feature of Pokemon Go, but your friend code is available somewhere publicly and you are getting unwanted friend requests? Find out how to change your Pokemon Go friend code to something different and invalidate the original code that you had posted somewhere.