Once you have learned how to record a video on your iPad 2, it’s a simple task to record nearly anything that you may want to watch again in the future. But recorded video takes up a lot of space, and your iPad has, at most, 64 GB of hard drive storage. So if you are running out of space for installing additional apps, a simple solution is to delete some of the larger videos that you don’t need from your iPad. You can learn how by following the tutorial below.

How to Delete a Recorded Video from the iPad 2

We’ve previously written about uploading photos and videos to Dropbox, which is a good solution if you don’t connect your iPad to iTunes very often. But if you have not offloaded a video that you are about to delete to a cloud storage service like Dropbox or your computer, then that video is going to be gone. So make sure that you will not need it again before you delete it.

Step 2: Tap the gallery thumbnail image at the bottom-left corner of the screen.

Step 3: Touch the Camera Roll button at the top-left corner of the screen.

Step 4: Tap the Videos option at the top of the screen.

Step 6: Touch the video that you want to delete, then tap the Delete button at the top-left corner of the screen. 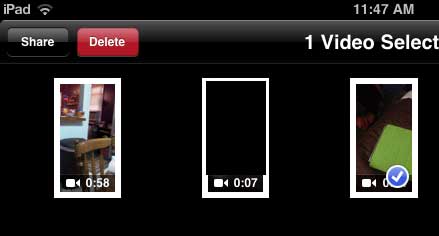 Step 7: Touch the Delete Video button to confirm that you want to delete the video from your iPad.

We have also written about how to delete a video from the iPhone. You can read that article here.

If you are recording a lot of videos and are running out of space on your computer, consider purchasing an external USB hard drive. This one on Amazon has 2 TB of hard drive space, which should be able to store all of your recorded videos, along with most of your other files.