Google has released their Chromecast, which is one of the most affordable options available when it comes to streaming online video content to your TV. For people that have been looking for a simple way to watch Netflix, YouTube and Google Play content on their TV, this is a great solution. At the time of this writing those are the only available options, though more are sure to be added as developers are given the opportunity to work with the device.

The Chromecast has only been available for a short amount of time, and is already sold out at most authorized retailers. The combination of the price, the Google name, and its’ functionality are going to make this a very hot commodity. If you haven’t already done so, I recommend ordering one from Amazon to get your place in line.

As seems to be the case with most of these kinds of products, the Chromecast is well packaged in a very compact box. 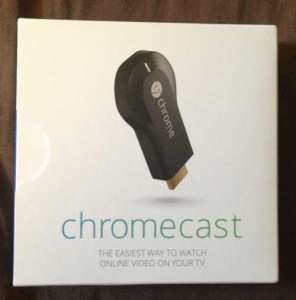 When you open the box you are greeted with some simple setup instructions, as well as the Chromecast itself. 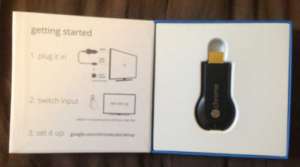 When you open the rest of the package, you will be left with the pieces in the image below. 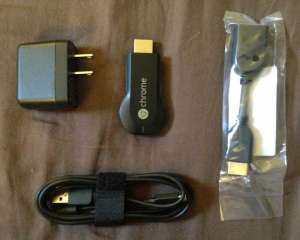 The setup process really is as simple as the instructions on the inside of the flap make it out to be. You connect the Chromecast to an HDMI port on your TV, then switch the input channel on the TV to the Chromecast’s HDMI port. You will be greeted with a screen like the one below. 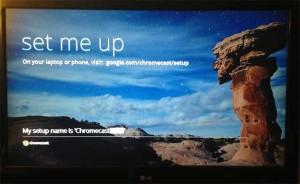 I was testing the Chromecast out with my iPhone, as that seems like the most convenient way that people will be using this device. I also tested it out with my MacBook Air because I wanted to see how the tab mirroring worked, but a smartphone was much better for me.

It’s important at this point to note that the Chromecast does not come with any kind of remote control. You are going to need to have another device, like a smartphone or laptop computer, to be able to use the Chromecast. If you are looking for something that will work completely on its’ own and is in this price range, then the Roku LT is probably a better option for you.

So after I set up the Chromecast, I decided to test it out with Netflix. (You should probably check and make sure that the Netflix app is updated before you try to use it with the Chromecast). The first time you launch Netflix after installing the Chromecast, you should be greeted with this message.

You can then go and launch a video in Netflix, where you will have a Chromecast icon like the one below (it’s the icon at the bottom-right corner), which you can use to stream that video to the Chromecast. 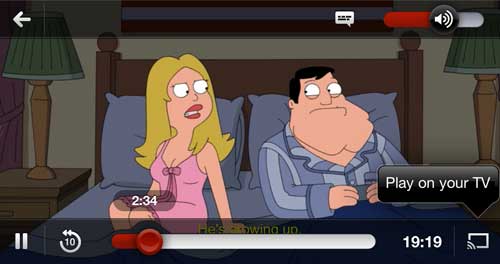 The Chromecast works by streaming this URL directly from the Internet, so you can freely use your phone to browse other sites or check emails without affecting the display on the Chromecast.

As mentioned earlier, I also tested out the tab mirroring from a laptop and found that it worked pretty well, although it was a little laggy. I played some videos from the Plex media server through Chrome and those looked great, but reading Web pages resulted in a noticeable delay when I would scroll on the computer versus when it would display on the screen. I wouldn’t recommend this feature for gaming or text editing, but it’s a good option if you want to watch a video from a location that isn’t directly supported by the Chromecast yet.

This is a really cool little gadget, and it is going to be insanely popular. The price is incredible, and the functionality of the Chromecast is only going to get better over time. It does have the drawback of needing to rely on a phone or laptop for content selection, but if you have a wireless network set up in your home, then you likely have something that will work with the Chromecast.

If you have an Apple TV or Roku already, then it is probably pretty difficult to justify this purchase. You already have access to the content streaming that the Chromecast is capable of, and you can use those devices’ dedicated remote controls instead of relying on a phone or a computer. But if you want something for a bedroom or a TV that doesn’t get used as often, then the lower price of the Chromecast would make it a good option in those situations.

The limited content currently available is definitely a drawback, but is something that will probably be fixed very shortly. This is just speculation, but I would be surprised if we didn’t see Hulu Plus, HBO Go and Amazon Instant support at some point in the near future.

If you can get a Chromecast and have a need to watch Netflix and YouTube on your television, then this is a great buy. It does what it claims to do very well, and its’ price makes it very approachable for people that might have been turned off to the higher prices of the Apple TV or the Roku 3.