Your iPhone is designed in such a way that it’s easy for people to reach you. Whether that’s through email, text messages, a phone call, or a third-party app, you are never more than a couple button taps away from someone.

But sometimes you want a reprieve from this access, and just need a moment or night of peace. Fortunately the Do Not Disturb feature on your iPhone lets you stop phone calls, notifications and alerts from creating the sounds and vibrations that they typically do, while also preventing them from lighting up your screen. The Do Not Disturb feature can be enabled either manually or scheduled through your iPhone’s Settings app.

What Happens If I Turn on Do Not Disturb on My iPhone?

When you go into your iPhone’s Settings menu and turn on Do Not Disturb, the following things will happen:

There are some additional options on this menu that let you modify how Do Not Disturb works on your device. This includes things like creating a schedule, configuring the setting to go on when you are driving, and even setting some contacts to be able to bypass Do Not Disturb mode by calling you. We will discuss these additional settings in the sections below.

How to Turn on Do Not Disturb on an iPhone Manually

The steps in this article were performed on an iPhone 7 Plus in iOS 11.4.1. These steps will also work on other iPhone models using the same version of iOS. 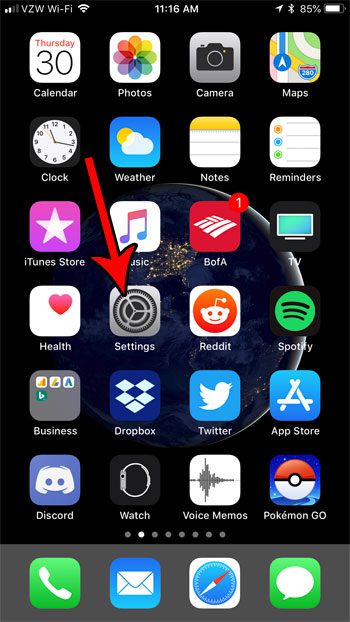 Step 2: Touch the Do Not Disturb button. 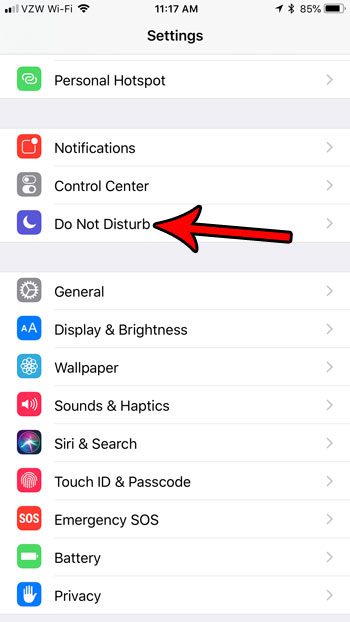 Step 3: Tap the button to the right of Do Not Disturb at the top of the screen to turn it on. 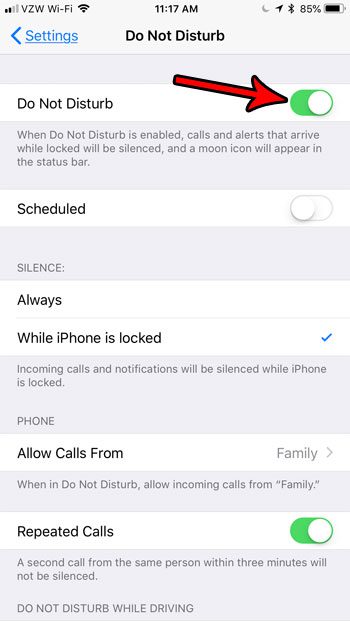 How to Create a Do Not Disturb Schedule on an iPhone

If you like the Do Not Disturb feature and think you would like to use it regularly, then you may want to set it up so that your iPhone goes into Do Not Disturb mode at a certain time every day.

How to Set Exceptions for Do Not Disturb on an iPhone

If you have a family member or contact that you want to be able to call you, even when your phone is in Do Not Disturb mode, then you can add them as an exception by completing the following steps.

Note that you will need to have a contact group, or include certain groups in your Favorites, to make this work most effectively.

Additional Notes About the iPhone Do Not Disturb Feature

Have you noticed that the Do Not Disturb icon is showing up next to some of your text message conversations? Find out more about the crescent moon next to names in your iPhone’s Messages app and see what it means, and how you can turn it on or off.