There are many different ways to get the HP Laserjet P2055dn to work on one Windows 7 computer. You can simply connect the printer to your Windows 7 computer, then wait for Windows 7 to add the printer on its’ own. You can install the printer from the included CD, or you can download updated drivers directly from the HP website. For a lot of people, most, if not all, of these situations will be more than adequate. However, I kept running into a series of problems when trying to get the printer to work when it was directly connected to one printer, then two other Homegroup users would try to print from it.

Read this article about updating HP Laserjet firmware to make sure that your Laserjet printer was not included in the list of Laserjet products that need a firmware update.

Problem 1 – Documents kept getting stuck in the queue, and would ultimately require removal and reinstallation of the driver.

Problem 2 – Homegroup printers could communicate with the printer, but the second page of documents would print with the wrong orientation.

Problem 3 – After several weeks, the printer would stop responding to print jobs. Ports would be correct, print spooler would be running – the printer just wouldn’t print.

One of the biggest problems I was encountering was that there are several different print drivers that will work with this printer. The one on the installation disc, the dedicated HP P2055dn driver, and the Universal HP PCL6 driver. Once I figured out the correct driver, Homegroup printing started working correctly.

Step 1: Turn off the printer, then delete the printer from each Homegroup computer. 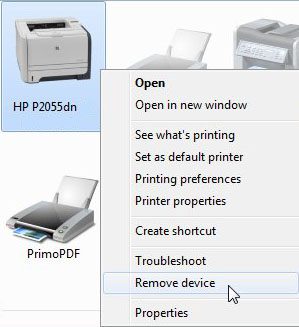 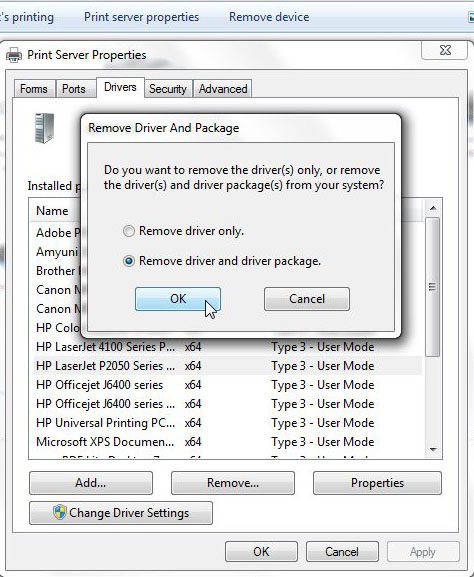 Step 5: Turn on the printer, then wait for Windows 7 to associate the printer with the driver you just installed.