The Apple Music service offers access to a tremendous library of songs. You can locate songs in the Apple Music library to add them to playlists, allowing you to customize the list of songs that you play on your device. But you might find that you no longer want to listen to a song, or that the same song is included on your playlist twice. In these sorts of situations, you will likely choose to delete the song from your playlist.

Fortunately the individual songs included in Apple Music playlists can be managed without affecting the rest of the playlist. So continue reading below to learn how you can delete an unwanted song from a playlist in the Apple Music app.

The steps in this guide were written using an iPhone 6 Plus, in iOS 8.4. Note that you need to have at least iOS 8.4 installed in order to use Apple Music. You can read here to learn about updating the operating system on your iPhone.

Note that if you have the same song included in other playlists, it will not be deleted from those playlists. You will need to perform these same steps to remove it on the other playlists. 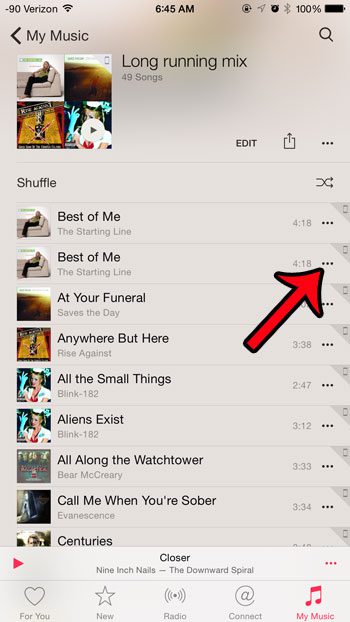 Did you sign up for a trial of Apple Music, but you aren’t sure if you want to continue using the service? Click here to learn how to turn off the automatic subscription renewal option for Apple Music so that you are not automatically charged when the subscription is up for renewal.