Excel 2011 spreadsheets are generally easier to read on a computer. And, if you’re lucky, most of the people that need to read or understand the information in your spreadsheets will be viewing them on a computer. But you will eventually need to print out a spreadsheet so that it can be read on paper, which brings its’ own set of problems. One of these problems is that, by default, Excel 2011 will not print gridlines. This means that your printed spreadsheet will be a collection of groups of data that might be difficult to separate visually. Fortunately you can enable gridlines when you print in Excel 2011 to help make it easier to read the spreadsheet.

Show Lines When You Print in Excel 2011

Gridlines are the lines that you see in your Excel 2011 spreadsheet when you are looking at it on the screen. They are a pattern of horizontal and vertical lines that provide a simple, visual way to separate your data into cells. It helps to prevent data from appearing to run together, while also helping to organize that data into rows and columns. So to bring this level of organization to your printer spreadsheets in Excel 2011, follow the steps below.

Step 2: Click the Layout tab in the horizontal green bar at the top of the window. 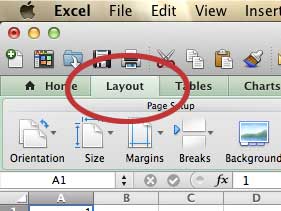 Now when you go to print your spreadsheet you will see that the gridlines are displayed in the Quick Preview, making it simpler to tell which data belongs to which row or column.

Are you having difficulty with recipients of your Excel 2011 spreadsheets being unable to open them? You may be using a newer version of Excel than them. Learn how to change your default file type in Excel 2011 to ensure compatibility with people that are using older versions of the program.

If you need to purchase Microsoft Office 2013 and/or additional copies of Office for Mac, consider getting an Office 365 subscription. For a low price you can install Office on up to five computers, which can include any combination of PC or Mac machines.