If you have been using Excel for a while, then you have probably become accustomed to the way that it looks. The layout of the program has remained pretty similar through each version of the software, as there has always been a pattern of cells organized into rows and columns. Each cell is divided by gridlines, which make it simpler to tell where information in one cell ends and begins. But if you are doing something in Excel 2010 where the gridlines are distracting or unnecessary, then you may wonder how to remove gridlines from view in Excel 2010. This is an option that you can toggle on and off in the program, allowing you to customize the display of your spreadsheet to your current task.

Many people like to print their spreadsheets with gridlines because it is usually easier to read. The method for performing that action can be found here. But removing them from view on your screen is a slightly different matter. In fact, you could even choose to print gridlines, but not show them on your screen. Continue reading below to learn how to remove the gridlines from the Excel 2010 spreadsheet on your computer screen.

Step 1: Open the spreadsheet for which you want to remove the gridlines from view.

Step 2: Click the Page Layout tab at the top of the window.

Step 3: Click the box to the left of View under Gridlines in the Sheet Options section of the ribbon at the top of the window to remove the check mark. 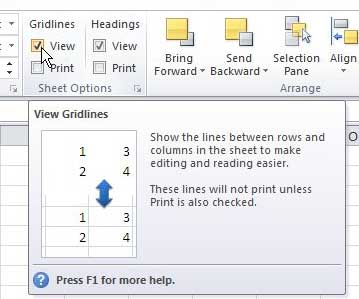 The lines that previously separated your cells should now be gone from view. If you want to print your gridlines, despite them not being visible on your screen, you can check the option to the left of Print under Gridlines in the ribbon at the top of your window.