The Chromecast is a popular device because it has a low cost, it’s made by Google, and it allows you to watch videos on your TV that you otherwise would have had to watch on a computer or your phone. By simply having the Chromecast on the same wireless network as the device that you want to use to control the Chromecast, you can easily watch streaming video content from places like Netflix, YouTube and Google Play.

Google and Hulu have also made it possible to watch Hulu Plus content on the Chromecast, and it is done in a similar way to how you would use the apps that had compatibility with the Chromecast when it first launched.  So continue reading below to learn how you can start watching Hulu on your TV with the Chromecast and your iPhone 5.

You can also use an iPad to control your Chroemcast. If you don’t have an iPad yet, but have been thinking about it, then now is a great time to get the first generation of iPad Minis. Apple just lowered the pricing, making it one of the best tablet values you can buy. Learn more about the iPad Mini here.

Use Your iPhone 5 to Watch Hulu on the Chromecast

The first thing that you will need to do before using your iPhone 5 to watch Hulu on the Chromecast is make sure that you have the most current version of the Hulu app. You can read this article to learn how to update apps on the iPhone 5. You will also need to be connected to the same wireless network as the Chromecast. Then, provided that you have a valid Hulu Plus subscription and have signed into your account on the Hulu Plus iPhone app, you will be able to follow the steps below to start watching on your TV.

Step 1: Touch the Hulu Plus icon to launch the app.

Step 2: Touch the Chromecast icon at the top-right corner of the screen. Note that if you do not see that icon, then your iPhone and your Chromecast are not on the same wireless network, or the Chromecast may not be powered on. 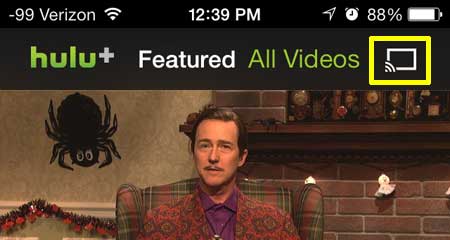 Step 3: Touch the Chromecast button at the bottom of the screen.

If you are looking for a way to watch more content on your TV, then the Roku 1 is a great choice. It offers many more channels than the Chromecast, plus it has its’ own dedicated remote control, and doesn’t rely on an iPhone, iPad or computer to control videos on your TV. Learn more about the Roku 1 here.

We have also written about how to use your iPhone 5 to watch Netflix on the Chromecast. You can read that article here.