Your iPhone is able to tell how you are holding it, and can decide how it thinks it should orient your screen. In most cases, the device is able to correctly evaluate how you wish to be holding it. But occasionally you may find that the auto-flipping from portrait to landscape orientation, or vice versa, is becoming an issue.

Luckily there is a setting on your device called Portrait Orientation Lock that will force the device to remain in portrait orientation. Once you have enabled this option by following our steps below, your device will no longer flip to landscape orientation when you turn it.

Stopping the iPhone Screen from Flipping

The steps in this article were performed using an iPhone 6 Plus, in iOS 8. These steps will also work in iOS 7, but devices that are running iOS 6 or lower will need to follow a different set of instructions. You can read the iOS 6 steps here.

Note that there is not a landscape orientation lock option on the device. It can only be locked in portrait mode.

Step 1: Swipe up from the bottom of your screen. 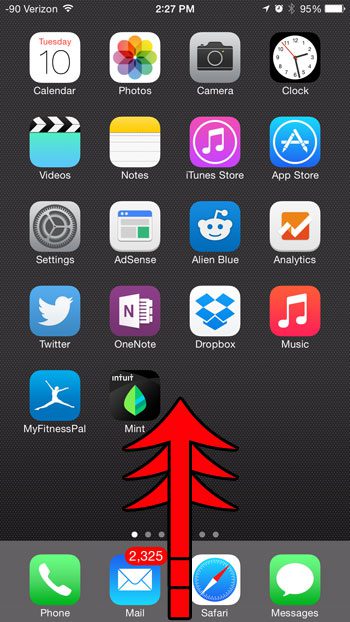 There are a lot of other useful tools and settings that you can access from the Control Center, including a flashlight. Read here to find out how to quickly access the flashlight on your iPhone.