Did you spend time meticulously selecting the songs that you wanted to put on your iPhone, then transfer them to the device through iTunes? Then you opened the Music app, only to find that it was showing every song that you have ever bought through iTunes? This is occurring because an iPhone 5 running the iOS 7 operating system has a feature called Show All Music that will display the songs that are physically stored on the device, as well as songs that you own which are stored in iCloud.

The cloud songs are not taking up any space on your device, but they can make it difficult to locate the downloaded songs that you intentionally added to your iPhone. Fortunately this is a feature that you can turn off, and it can be done with just a few simple steps.

If you decide later that you want to download a song from the cloud to your iPhone, you can simply follow the steps below again, but turn on the Show All Music option that we will be turning off. Once the song is downloaded, you can simply turn it off again. 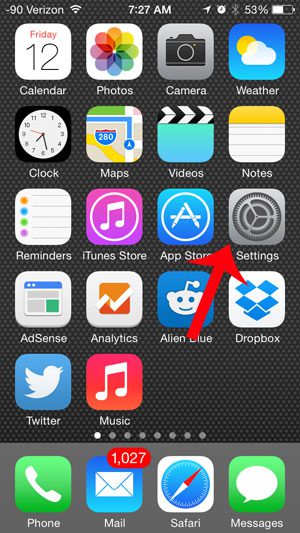 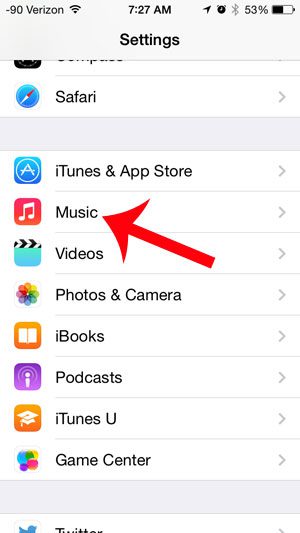 Step 3: Touch the button to the right of Show All Music to turn it off. Note that there will not be any green shading around the button when it is turned off. For example, this feature is turned off in the image below. 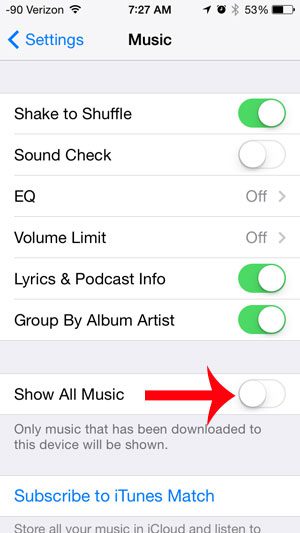 Are you running out of space on your iPhone, and need to delete some items or apps to make room? Our complete guide to deleting things on the iPhone can help you out.