Do you like to keep Pandora open when you are listening to music so you can see what song is playing? If so, then you may be used to tapping the screen periodically to keep it from turning off. This is a setting called Auto-Lock, and Pandora has its own setting for it, separate from the auto-lock setting for the rest of the apps on your iPhone.

If you would like to keep the screen on when Pandora is playing, then our tutorial below will show you where to find and change the setting that permits that behavior to occur. This will cause your battery to drain faster, however, so you may want to keep it plugged in and charging, or have a portable charger handy. Step 2: Touch the icon at the top-left of the screen with the three horizontal lines. Step 5: Tap the button to the right of Enable Auto-Lock so that the screen remains on when Pandora is open and playing music. 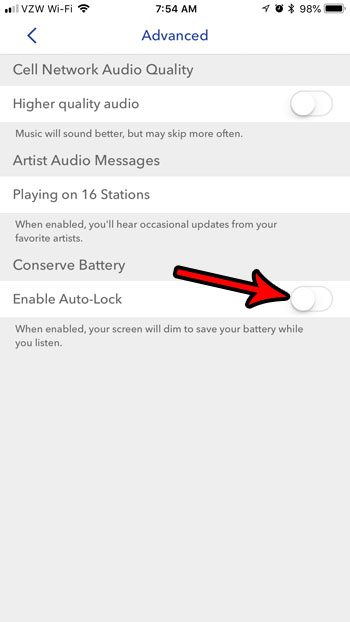 Once you have changed this setting, your screen won’t lock when you are playing music in Pandora.

The steps in the article above detail how you can change the auto lock setting when you use the Pandora app. However, there is also a device-wide auto lock setting that controls when the screen turns off as you are using other apps. This is a good setting to customize if you find that the iPhone is turning off too quickly or too slowly when you haven’t interacted with it in a while.