You can create multiple alarms on your iPhone 5, which is helpful if you don’t wake up at the same time everyday. But the ability to create so many alarms can lead to an excessive number of them being stored in your clock app, making it difficult to find the one that you need. Fortunately you can delete alarms from the iPhone 5 to get rid of alarms you don’t use anymore.

Get Rid of an iPhone 5 Alarm

As mentioned earlier, you can have a large number of alarms on your phone. But only five are visible on a screen at one time, which requires you to scroll down if you need to find later alarms. So follow the steps below to learn how to delete unnecessary alarms from your iPhone 5.

Step 4: Tap the red button to the left of the alarm that you want to delete.

Step 5: Press the Delete button to the right of the alarm to remove it. 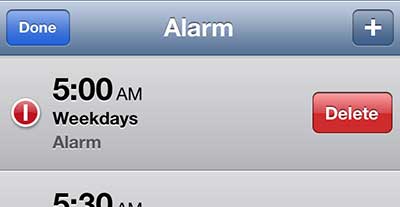 We have also written about editing alarms, if you find that you want to modify an alarm instead of deleting it.