A really frustrating element of cell phone alarms is when they go off and you don’t need to wake up. Whether the alarm is going off on the wrong day or the wrong time, it can have a negative effect on your morning. The iPhone 5 has an option that allows you to customize the days on which your alarm is going to go off, ensuring that your early morning work alarm won’t prematurely wake you on the weekend. So check out the tutorial below to learn how to set up an iPhone alarm that only goes off on the days that you specify.

Set Your iPhone Alarm for Work Days Only

One nice thing about the iPhone alarm system is that you can set up multiple alarms and customize all of them to go off on different days. So even if you need to get up at a different time every day, you can configure your alarms so that is possible.

Step 1: Open the Clock app on your iPhone 5.

Step 2: Touch the + symbol at the top-right corner of your screen. 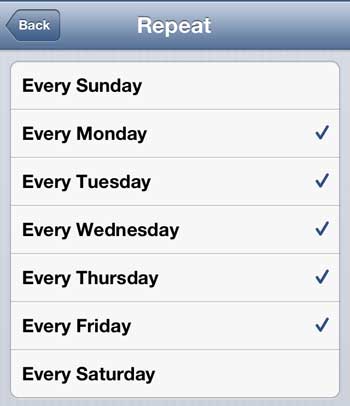 Step 5: Set the Sound, Snooze, Label and Time option for the alarm, then touch the Save button at the top-right corner of the screen. 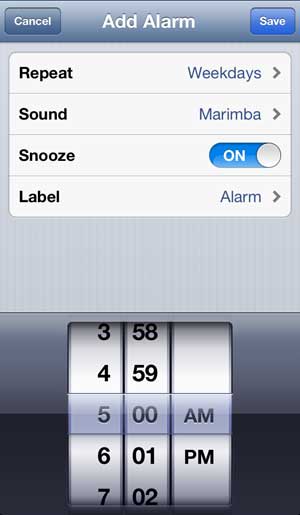 If you’ve been looking for an alarm option that doesn’t rely on your phone, there are still many interesting ones to be found. This one from Amazon, for example, will project the time on your wall or ceiling, as well as display the current temperature.

Learn how to edit an alarm on the iPhone 5 that you have already created.