Much of the utility that you can gain from installed apps on your iPhone is found when those apps start using some of the default functionality of the phone. Whether this involves using Location Services to find things that are nearby, or integrating with your Camera to take, edit, and share pictures, your phone is capable of quite a lot. One other area where app functionality can be found is with the Maps app.

Some of the apps that you will install have something called a Maps extension that enables them to use the Maps service. However, it is possible that the extension is not enabled, and you are not using the app to the fullest extent of its capabilities. Our tutorial below will show you where to find and enable these Maps extensions on your iPhone.

How to Turn on a Maps Extension on an iPhone

The steps in this article were performed on an iPhone 7 Plus, in iOS 10.2.1. These steps will assume that you have an app on your iPhone that has a Maps extension. If you follow these steps and don’t see an app on the final step, then you likely do not yet have an installed app that can use the Maps application on the device.

Step 2: Scroll down and select the Maps option. 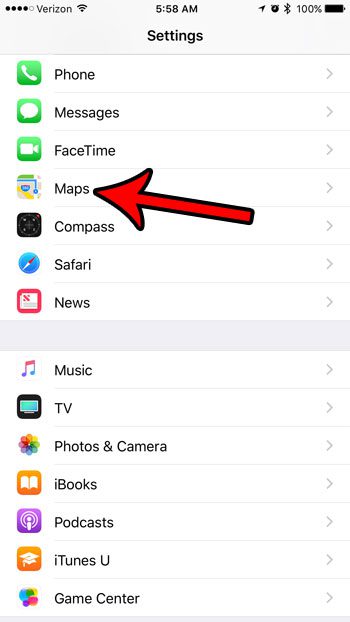 Step 3: Scroll down to the Extensions section of the menu, then tap the button to the right of each available extensions that you would like to enable. A Maps extension is enabled on your iPhone when the button is in the rightmost position, and there is green shading around the button. I have enabled the Uber Maps extension in the image below. 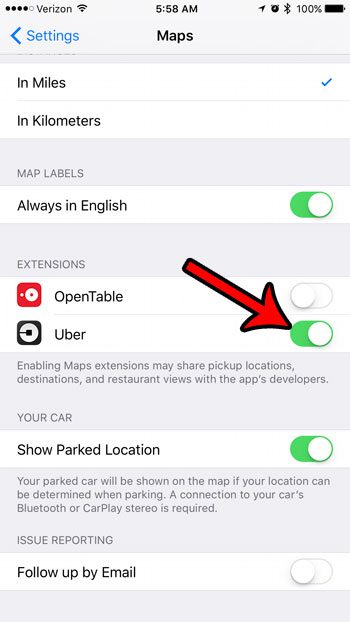 Are you unable to install new apps, or download new music and movies because you are out of storage space on your iPhone? Learn more about deleting items from your iPhone and see some of the places you can look to regain storage space.