The Control Center is a menu on the iPhone that you can open by swiping up from the bottom of the screen. It contains a number of helpful settings and tools, like the flashlight, as well as controls for the music that is playing on your iPhone. In iOS 9 these controls were visible on the first screen of the Control Center but, in iOS 10, they have been moved to a secondary screen. This secondary screen did not always exist, so the fact that the music controls are now found in that location can be confusing.

Our guide below will show you the steps to take on your iPhone so that you can find and use the Control Center music controls in iOS 10.

The steps in this guide were performed on an iPhone 7 Plus, in iOS 10.0.3. These steps will also work for other iPhone models running iOS 10.

Step 2: Swipe to the left on the Control Center. 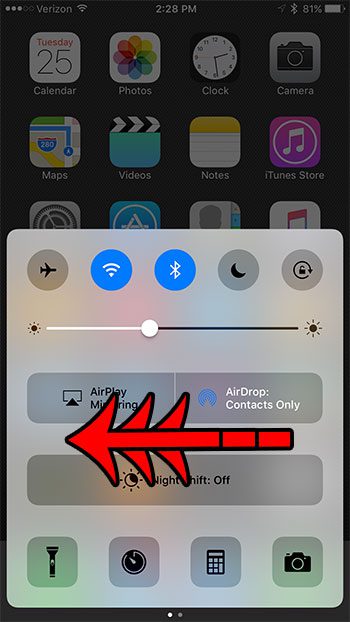 Step 3: Use the controls on this menu to fast forward or rewind, play or pause, adjust volume, or to open the song in the Music app.

The iOS 10 update included a number of other settings that you may not like. You can read this article if you would like your iPhone screen to stop turning on automatically when you lift it. That functionality can create problems in certain scenarios, so it might be negatively impacting the manner in which you use your iPhone.