A flashlight on your iPhone is a surprisingly useful thing to have access to. Several versions of iOS ago, you could only get the flashlight by downloading third-party apps. But Apple includes it as part of iOS by default now, making it much more convenient to use.

The flashlight can even be accessed directly from the lock screen, on a menu called the Control Center. This means that you can access the flashlight quickly, without even needing to unlock your iPhone with Touch ID, or by entering a passcode. But if you can’t get to the Control Center from your lock screen, then you might need to change a setting. Our guide below will show you where to find that setting so that you can start using your flashlight without needing to enter your passcode.

The steps below were performed on an iPhone 6 Plus, in iOS 9.3. Note that your iPhone needs to be running at least iOS 7 to have access to the Control Center. The Control Center includes a number of other helpful features as well, such as the ability to lock the screen in portrait orientation.

These steps are repeated below with pictures – 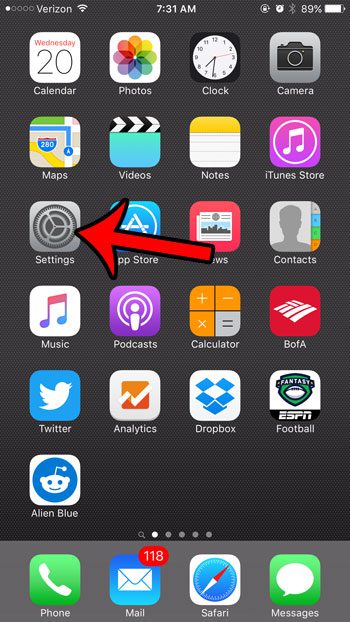 Step 3: Tap the button to the right of Access on Lock Screen to turn it on. You will know that the setting is enabled when there is green shading around the button. It is enabled in the picture below. Now you can simply swipe up from the bottom of the lock screen to open the Control Center, then tap the flashlight icon at the bottom-left corner of the screen.

Do you find it inconvenient to enter your passcode every time you want to use your iPhone? Learn how to remove the passcode from an iPhone 6 and make it a little easier to access the device.