The Siri voice assistant can be very helpful, especially when you aren’t able to type on your phone, or if something is just easier to say than type. But if you want to know what you can ask Siri, then there are a surprising number of things that she can do. You can also change Siri’s voice, if you are curious.

Siri is able to launch apps, make calls, send text messages and initiate Web searches, along with nearly any other task that might conceivably be completed with voice control. If you are confused or having trouble with something, however, you can see a list of Siri’s uses and some examples of context that will help you to figure out what you can ask Siri.

What Can I Ask Siri?

You can ask Siri nearly anything that you can think of, and she will attempt to give you an answer. Some questions or commands will open apps on your device, while others will initiate a Web search to try and find your answer. If you are curious about things that Siri can do, or if you are simply wondering how to ask a question to get something to happen, then follow the steps below to see a list of different commands that you can ask Siri.

Conversely, you can also ask Siri what you can ask her. Touch and hold the Home button to activate Siri, then say “What can I ask you Siri?” This will bring up the same list of commands that we navigated to earlier. 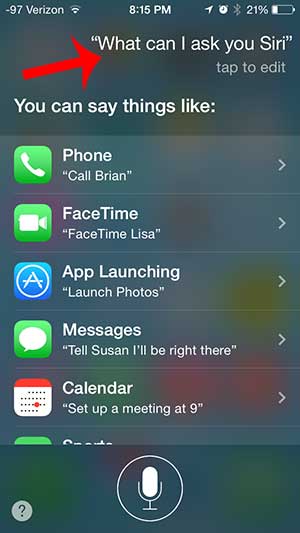 Are you receiving unwanted calls on your iPhone? Start blocking callers so that their calls, text messages and FaceTime calls no longer come through.