When you are thinking about getting a device that you can connect to your TV to stream video and music, one of the most important things to consider is whether that device supports the services to which you already subscribe. But it can be difficult to find that information across the Internet, so we’ve created this helpful chart that allows you to see all of that information in one place.

You can even use this chart as a guide to help you decide which device is the best choice for you, if you are unsure about which option to purchase. 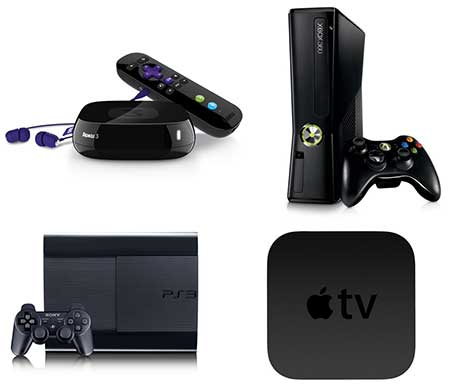 As you can see, the Apple TV doesn’t natively support many of these services. But when you couple it with AirPlay, a lot more things become possible. For example, you can use AirPlay to stream HBO Go and MAX Go from your iPhone or iPad. You can also stream nearly anything over AirPlay from a browser on a MacBook.

With that being said, I’ve found that the Apple TV is much more appealing when you look at it as an iPhone, iPad or MacBook accessory. On its’ own it isn’t capable of as much as its’ competition but, when coupled with another AirPlay compatible device, it becomes a more formidable device.

***There are some ways that you can take advantage of apps like the PS3 Media Server to get access to a few more apps, but we won’t go into the specifics of these “hacks” here. If you are interested in finding out how to access certain services for which there is no dedicated app, you can often find a work around by Googling for it.

The Roku 3 has the most options for video and music streaming, as you can see from the information above. Click here to read our Roku 3 review to see why it is such a good choice.

We have also written a more comprehensive post about the reasons why you should purchase an Apple TV.