Apple is well-known as a manufacturer of quality products, but these products are also well known for being somewhat expensive. Therefore it is a little perplexing to find a product like the Apple TV that can be commonly found for less than $100. But this affordability also generates the question of whether that indicates a decline in quality or a lack of features. Fortunately this is not the case, as the Apple TV is a terrific device, and it is something that anyone that has already integrated with the Apple ecosystem should consider purchasing.

5 of the Best Features on the Apple TV

You will find a lot of information about the Apple TV online, as well as some comparisons to similar products like the Roku HD. But this review is going to focus on the better qualities of the Apple TV individually, so you can decide if it is the right product for you. 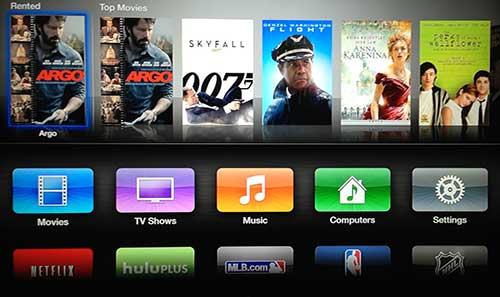 I’m putting this feature first because, for me, it is the most important one. Since I bought my first iPod years ago, I started to build up my iTunes library. There have always been ways to get that content to my television, such as connecting it to my TV with an HDMI cable, but those options are clunky and less than ideal. The Apple TV allows me to stream my purchased music, TV shows and movies from the iTunes servers to the Apple TV, then output that content through my television. It also provides a very simple way to purchase new content from iTunes, which is then available for download to your iPhone, iPad or iTunes-enabled computer.

This is accomplished in a fashion similar to Netflix or Hulu streaming, both of which are also available on the Apple TV. Note that this will require you to have a persistent Internet connection on the Apple TV, as you will be streaming this content over the Internet, as opposed to from a local computer. If this is not an option, then you can download from iTunes to your computer, then use the Home Sharing feature described later to stream that content from your computer through your wireless network. 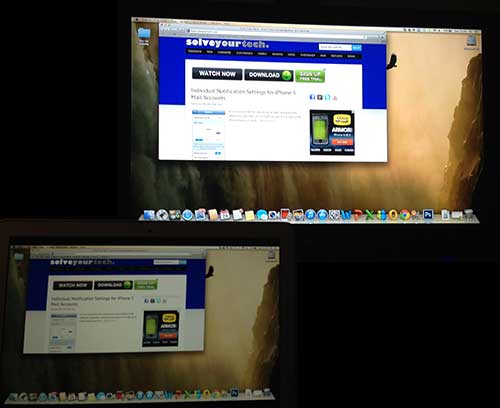 AirPlay is a feature on certain Apple devices where you can stream the content on devices like the iPhone, iPad or MacBook Air through your Apple TV so that it is displayed on your television. This is the simplest way to view device content on your TV, as it can be accomplished with the click of a button on an AirPlay enabled device that is on the same Wi-Fi network as your Apple TV. 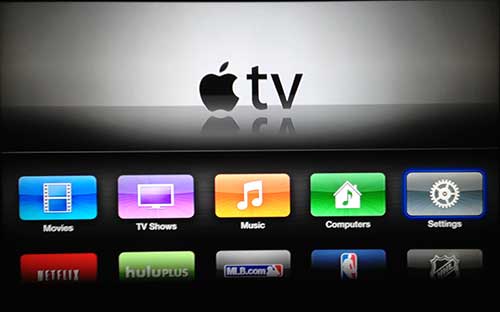 Apple TV’s interface is a breeze to navigate. While it strays a bit from the iOS and Mac OS X interface with which you might already be familiar, there is little ambiguity in how to find and play your content. Simply use the included remote control to navigate through the menu and select your source, then browse through the available titles and play the one you want. And, as is the case with most Apple products, the setup provides a user-friendly walkthrough that will have you connected to your wireless network and Apple ID within minutes.

Since all of the content in your iTunes library may not have come from iTunes, you might be concerned about how to play that content with the Apple TV. This is where a feature called Home Sharing comes into play. By enabling the Home Sharing setting in iTunes, you will have access to the rest of the music and videos that may not have been purchased in iTunes. This is a great choice if you are using a Windows computer to manage your iTunes library, and are therefore unable to take advantage of AirPlay.

You can find out more about the Apple TV by visiting Amazon and reading reviews from other owners of this device. I also recommend reading up on the Roku HD, as it is a very similar device that might be a better option for people that are less integrated into the Apple ecosystem, or are looking for apps like Amazon Instant Video or HBO Go.