Typing in All Capital Letters on the iPad 2

This option will work for most of the apps on your iPad 2 where you can pull up a keyboard. It’s important to bear in mind, however, that many username and password combinations for websites are case-sensitive. So make sure to check that caps lock is off before you attempt to log into an account on a site where your username or password has lower-case letters.

Step 1: Open an app where you want to type in all capital letters. I am going to use the “Notes” app for this example.

Step 2: Tap somewhere on the screen where you want to type, which will bring up the keyboard. 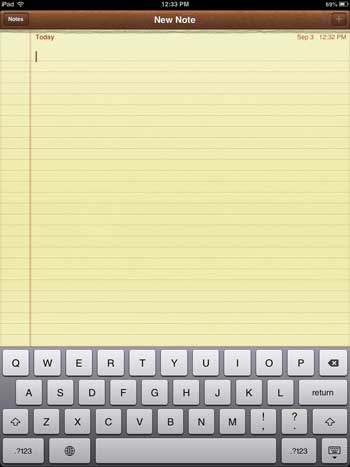 Step 3: Double-tap the shift arrow, highlighted in yellow in the image below.

Step 4: The shift arrow should now be blue, allowing you to type in all capital letters.

You can turn off caps lock by touching the shift arrow one more time, which will return it to the default gray color.

Note that caps lock will not remain on if you exit an app and return to it. You will need to double-tap the “shift” arrow any time that you want to start typing in all capital letters.

If you are looking for an affordable gift for a friend or family member that they will really love, consider a Roku LT. It connects easily to any television with an HDMI port, then it uses your wireless network to stream video from Netflix, Hulu Plus, Amazon Instant and more. Learn more about the Roku LT.

If you’ve been wondering how you can print from your iPad 2, you can read this article to learn how to print an email.