Excel 2013 has a wide range of formatting choices that can be applied to cells in a worksheet. But some of the default formatting choices can be frustrating to deal with, especially when you need your numbers to display a certain way.

One characteristic that you might be dealing with involves numbers with a second decimal place where the number is a “0.” Excel will automatically stop that number from appearing, even if you have entered the number into the cell. Fortunately you can get Excel to stop removing this 0 in the second decimal place by switching a setting on the cell formatting menu.

How to Show Two Decimal Places Unconditionally in Excel 2013

The steps below are going to show you how to adjust the formatting for a group of cells in an Excel 2013 workbook. Only the cells that you select in the process below will display two digits behind the decimal point. If your numbers extend to three or more decimal places, Excel will round those values up or down. The full values will still be visible when you select the cell, but will only display as with two decimal places. Step 3: Click the Number option under Category, enter “2” in the field to the right of Decimal places, then click the OK button at the bottom of the window. All of the cells that you had selected should now display numbers with two places behind the decimal place. 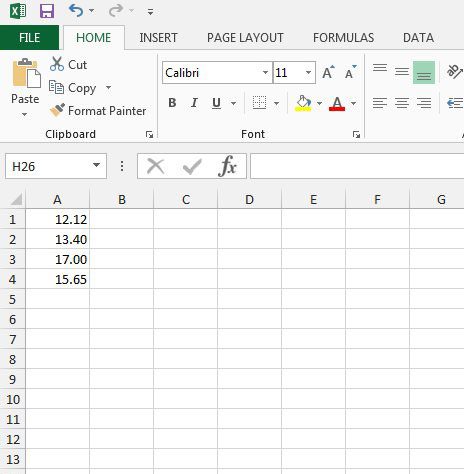 Are you trying to print a spreadsheet from Excel 2013, but it is printing really small? Read this article and learn about options to adjust to make your spreadsheet print larger.